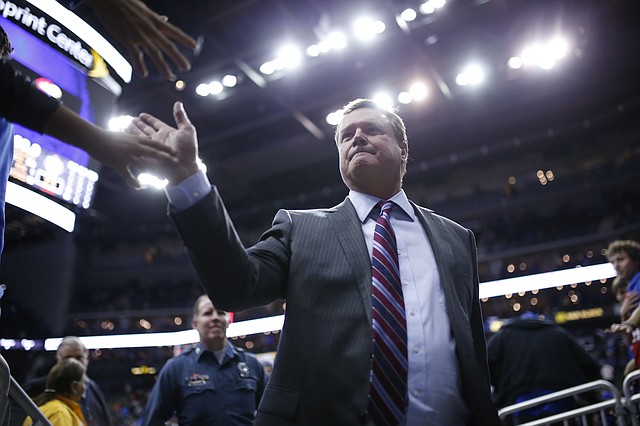 Kansas head coach Bill Self slaps hands with fans after the Jayhawks' 89-71 win over Davidson, Saturday, Dec. 17, 2016 at Sprint Center.

KU coach Bill Self says Jayhawks, Zags 'committed to playing each other'

Although there still is no official word on the season-opening event that would pit Kansas against Gonzaga and Saint Joseph’s in late November in Fort Myers, Fla., Kansas coach Bill Self said Friday that he and Gonzaga coach Mark Few were “committed to playing each other.” By Matt Tait

The Louisville Courier-Journal report that revealed that 98 percent of the Adidas money paid to Louisville went directly to basketball coach Rick Pitino suggested an obvious question locally: What percent of the money that Adidas pays Kansas Athletics Inc. goes directly to Bill Self? Zero, according to KU associate athletic director Jim Marchiony.

Tom Keegan: Bill Self by the numbers

On the 27th day of December, 1962, Billy Eugene Self was born in Okmulgee, Okla., which means he celebrates his 54th birthday today. Here’s a 1-through-54 look at how each number has a connection to Self, via this year’s teams and others he has coached.

Self calls KU-UNLV clash in Vegas 'a business trip'

Visiting a place known as Sin City and by the slogan “What happens in Vegas, stays in Vegas,” the Kansas men’s basketball team figures to get a much different experience than most while in the gambling capital of the world Thursday night to take on UNLV at 8 p.m. at Thomas and Mack Center. By Matt Tait