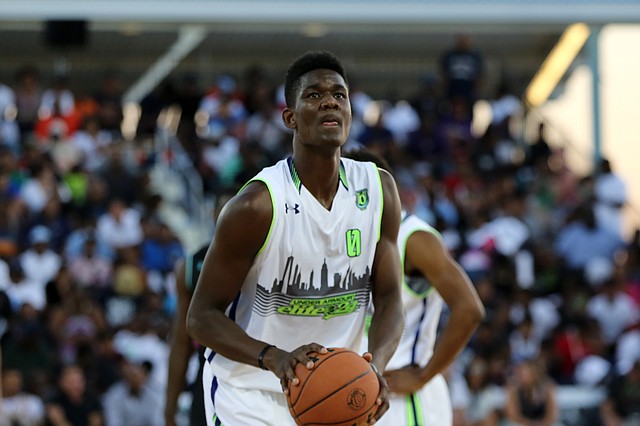 Team EZ Pass’ DeAndre Ayton shoots a free throw against Team Doo Be Doo in the Under Armour Elite 24 game in this photo from August 22, 2015, in Brooklyn, N.Y. Ayton, ranked No. 1 in the Class of 2017, is being recruited only by Kansas University — so far.

There’s still a long way to go in the pursuit of 7-foot center DeAndre Ayton, Rivals.com’s top-ranked prospect in the class of 2017, but Bill Self’s Jayhawks certainly seem to be in a good position. By Matt Tait

Center of attention: KU alone in pursuit of No. 1 prep Ayton

Kansas University’s basketball program, which recently landed a commitment from Josh Jackson, the No. 1 prospect in the high school recruiting class of 2016, also leads for the top player in the Class of ’17. By Gary Bedore