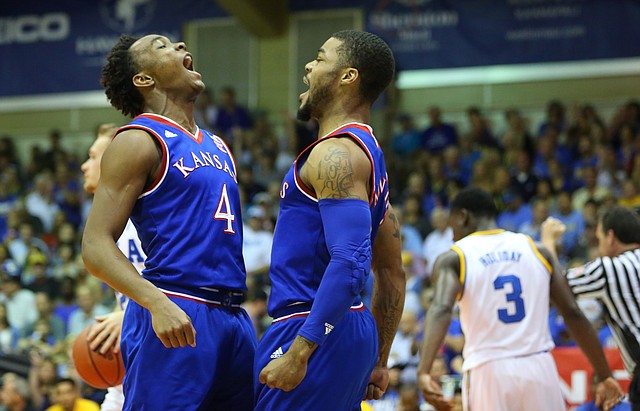 Self on preseason Big 12 honors: 'It doesn't mean anything'

Kansas basketball coach Bill Self said nobody in Lawrence would be celebrating too hard over the preseason honors bestowed upon first-team all-Big 12 selections Frank Mason and Devonte' Graham and Big 12 freshman of the year Josh Jackson.By Matt Tait

Earlier this week, DraftExpress.com, which tracks and predicts the top prospects on the NBA radar, released the Top 10 college players from the event and KU guards Devonte' Graham and Frank Mason both landed on the list. By Matt Tait

Tom Keegan: Take away one starter and Kansas still team to beat in Big 12 basketball race

Kansas is so deep that Tom Keegan believes that if the Big 12 were allowed to choose one starter to remove from KU's roster it still would be favored to win a 13th consecutive Big 12 title.

Tuesday night, during a 92-73 slaughter of UCLA in the Maui Invitational semifinals at Lahaina Civic Center, sophomore guard Devonté Graham showed with absolute certainty that all of that attention on the scoring end of the floor did not do any harm to his ability to defend. By Matt Tait

Picking up right where they left off in Monday's 123-point explosion against Div. II Chaminade, the Jayhawks raced out to a 59-point first half and slaughtered UCLA in the Maui Invitational semis, 92-73, at Lahaina Civic Center on Tuesday night.