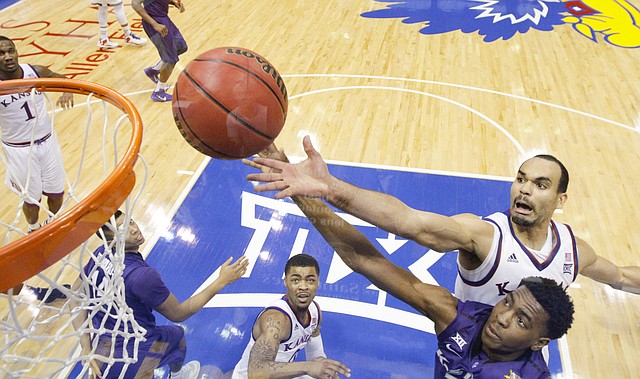 Kansas forward Perry Ellis fights for a rebound with Kansas State forward Nino Williams (11) during the second half on Saturday, Jan. 31, 2015 at Allen Fieldhouse.

Perry Ellis produces on, off court

Kansas University junior forward Perry Ellis was named first-team All-Big 12 on Sunday by league coaches and picked up the same distinction Monday from the Associated Press. But there is much more to the Wichita native, who values giving back off the court in his spare time. By Gary Bedore

Made for this: Kansas native Perry Ellis thrives in showdown

Kelly Oubre Jr. was sure the one native Kansan in Kansas University’s starting lineup would come to play with great intensity on Saturday afternoon in Allen Fieldhouse. Perry Ellis scored a team-leading 16 points and grabbed a game-high 12 rebounds in the Jayhawks’ 68-57 victory over rival Kansas State. By Gary Bedore