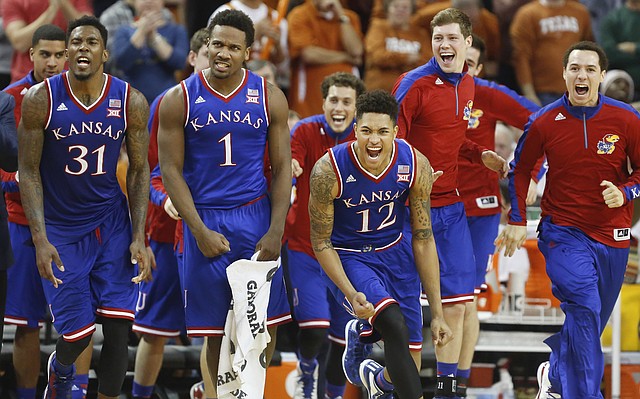 Kansas players Jamari Traylor, left, Wayne Selden, Kelly Oubre, Tyler Self and Evan Manning go wild during a timeout in the second half on Saturday, Jan. 24, 2015 at Frank Erwin Center in Austin, Texas.

Self: ‘We just watch’ conference race

Bill Self, who has coached Kansas University’s basketball team to 10 consecutive Big 12 titles, most certainly keeps track of what’s happening day to day in the league. What he doesn’t do is root for — or against — certain teams with eight games yet to be played. By Gary Bedore

Kansas University basketball coach Bill Self, who can be a perfectionist when it comes to assessing the play of his team after games, found little to nothing to fault after Saturday’s 75-62 dismantling of Texas on Saturday in Frank Erwin Center. By Gary Bedore