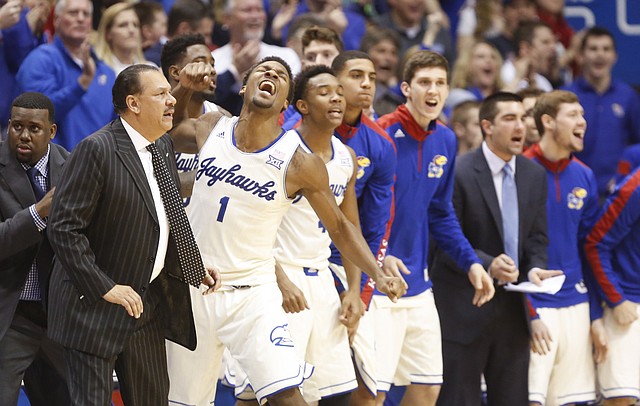 Kansas guard Wayne Selden Jr. (1) and the rest of the bench celebrate a three by teammate Brannen Greene to reclaim the lead late in the second half on Monday, Jan. 19, 2015 at Allen Fieldhouse.

As usual, many Mondays will be big for the Kansas University basketball team in the 2015-16 season, once Big 12 play begins in January.

A game in Ames, Iowa, not involving Kansas University has assured the program from Lawrence yet another conference crown. Iowa State protected its home court on Big Monday against Oklahoma, winning 77-70, meaning KU has wrapped up at least a share of its 11th Big 12 regular-season championship in a row.

Just in time: Jayhawks come through in clutch to beat OU

Bill Self raced through the fabled northwest tunnel of Allen Fieldhouse with a big smile on his face, slapping palms with a pair of fans on the way to the locker room after Kansas University’s 85-78 ESPN Big Monday victory over Oklahoma. By Gary Bedore