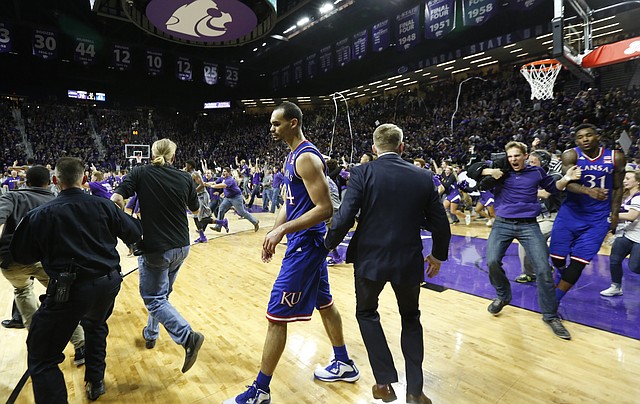 Jamari Traylor did not get nominated for the Nobel Peace Prize for his calm, cool, collected behavior after last Feb. 23’s Kansas-Kansas State basketball game at Bramlage Coliseum in Manhattan.

Kansas State students will have to sign a sportsmanship pledge before they can pick up their tickets for sporting events this year.

The much publicized court-storming contact between a Kansas State fan and Kansas University basketball player Jamari Traylor following the Wildcats’ Big Monday victory in Manhattan has resulted in a citing for disorderly conduct.

The Big 12 Conference, both Kansas University and Kansas State University, as well as the K-State Police Department all have spent the early part of Tuesday reviewing the court-storming scene that turned wild following the K-State men's basketball team's 70-63 upset victory over No. 8 Kansas Monday night at Bramlage Coliseum.

For Kansas State, Big Monday's Sunflower Showdown was a beautiful victory against favored in-state rival Kansas, 70-63. And then the students, taking advantage of lax security, stormed the court. In a blink, the scene of highly entertaining basketball theater grew ugly, unnecessarily dangerous. By Tom Keegan