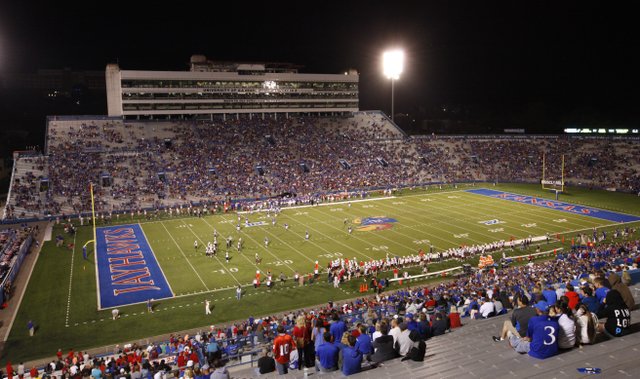 During a meet-and-greet event for the Kansas football team Wednesday, KU athletic director Sheahon Zenger delivered news that renovation of Memorial Stadium and other football-related projects totaling $300 million are around the corner. By Bobby Nightengale

The Kansas University football program, along with the rest of the conference, received its first look at the Big 12 Conference slate for the 2015 season on Wednesday.

Saturday afternoon marks the final chance for 20 Kansas University football seniors to make one last memory at Memorial Stadium, the place they’ve called home for the past four or five seasons.

Saturday evening at Memorial Stadium, the anonymous donor who picked up the $500,000 tab that coincided with Kansas University officials’ decision to remove the track and replace it with turf, got a first look at what that money did for the KU football experience. By Matt Tait