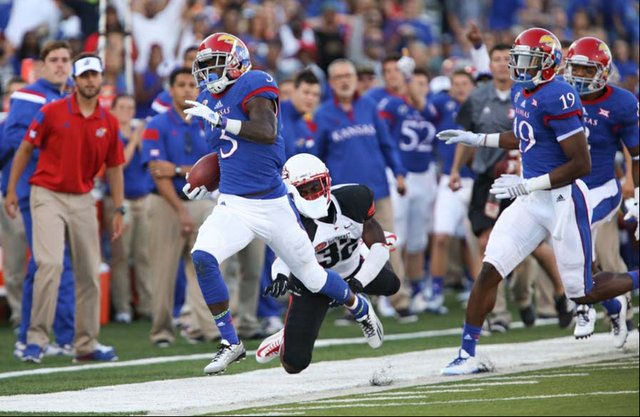 Kansas receiver Tony Pierson cruises up the sideline for a long gain against Southeast Missouri State during the first quarter on Saturday, Sept. 6, 2014 at Memorial Stadium.

KU's Tony Pierson being evaluated for injury near neck

Kansas University senior Tony Pierson, who missed all but two plays of last Saturday's 34-21 loss at Texas Tech, is being evaluated by doctors this morning for an injury in his neck area and the full scope of the injury is not yet known. By Matt Tait

When you own a Ferrari, taking the bus is not quite as fulfilling. That’s the epidemic plaguing the Kansas University football team five games into the 2014 season, with senior Tony Pierson stuck in neutral and the rest of the offense struggling around him.

GAMEDAY BREAKDOWN: A look at Central Michigan vs. Kansas