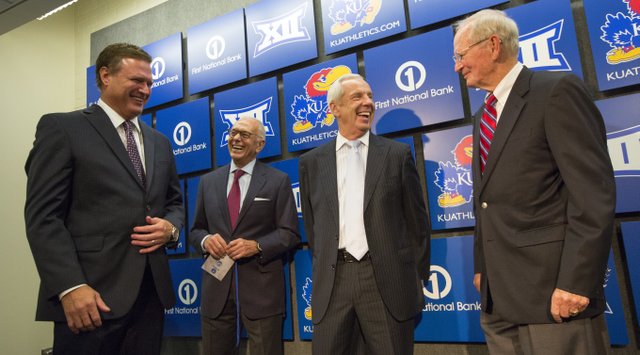 North Carolina basketball announced Thursday morning that longtime coach Roy Williams, who spent 15 seasons at Kansas prior to UNC, was retiring after 33 years as a college head coach. By Matt Tait

Although Kansas coach Bill Self revealed his choice several weeks ago, the pick became official on Thursday, when the Naismith Memorial Basketball Hall of Fame announced the presenters for this year’s class. When the KU coach is inducted into the Hall of Fame on Sept. 8 in Springfield, Mass., Self will be presented by former Kansas coach Larry Brown.By Matt Tait

Monday night’s 60 years of Allen Fieldhouse celebration might have been about a building that began with a $2 million budget in 1955 and still stands strong today, but, for several former Kansas University players who once called the venue home, it was as much about the men who made memories inside of it as anything. By Matt Tait