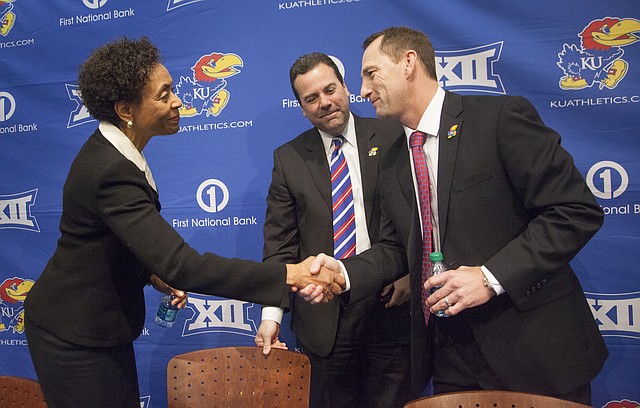 Sheahon Zenger played football at Fort Hays State and MidAmerica Nazarene and served as recruiting coordinator at Kansas State, South Florida and Wyoming before taking a turn toward the administrative side of athletics in 2001 at K-State. The Kansas AD’s background hasn’t translated to on-field success for the Kansas football program. By Tom Keegan

The day after David Booth’s $50 million donation was announced at a dinner at the Jayhawk Club attended by most of the coaches in the University of Kansas athletic department, I chatted with him for 20 minutes before KU’s 56-34 loss to West Virginia.

If only third-year Kansas head football coach David Beaty had followed his own advice, he might have more fodder with which to state his case for keeping his job beyond this season.

How much is a winning football season worth? An extra $40,000 a year for University of Kansas athletic director Sheahon Zenger. That annual performance bonus is among specific perks — rather, potential perks — outlined in Zenger’s latest contract renewal, requested and obtained Tuesday by the Journal-World.

Athletic director Sheahon Zenger and football coach David Beaty haven't had much cause for smiling in recent weeks, but chancellor Bernadette-Gray Little's decision to step down in the summer of 2017 bodes well for the job security of both men.

Kansas athletic director Sheahon Zenger, who hired and fired Charlie Weis, won't get to make another hire if David Beaty doesn't turn around a Kansas football team that was creamed in Memphis, 43-7.

Kansas Athletics, Inc., and first-year Kansas University football coach David Beaty recently finalized Beaty's five-year contract and the details and language within it may be the best indicator to date that KU learned a valuable lesson from the failings of its past two contracts with dismissed football coaches Turner Gill and Charlie Weis.