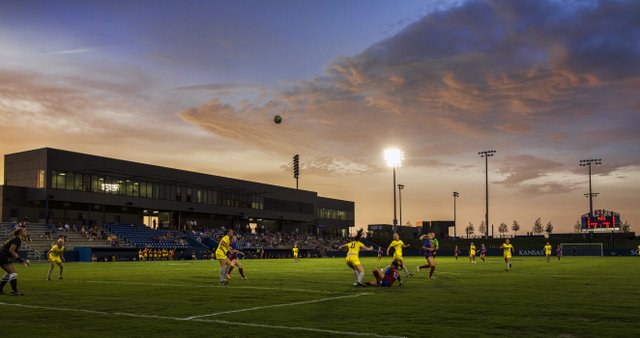 There’s a theory floating around the Kansas athletic department that suggests that brand new, first-rate facilities for the KU football program will help the Jayhawks return to their winning ways. The resurgence of the Kansas women’s soccer program is proof positive that such a vision can come true. By Matt Tait

For the second time in the last three seasons, the Kansas women's soccer team will host Missouri in the first round of the NCAA tournament. The Jayhawks (10-5-4) will take on the Tigers (11-6-2) at 1 p.m. Sunday at Rock Chalk Park in their seven NCAA tournament appearance in program history.

Friday night marked the first home game in the Kansas women’s soccer program’s history that was played under the lights of Rock Chalk Park, and the Jayhawks shined under them in a 3-1 victory against Wyoming in their season opener. By Chris Duderstadt