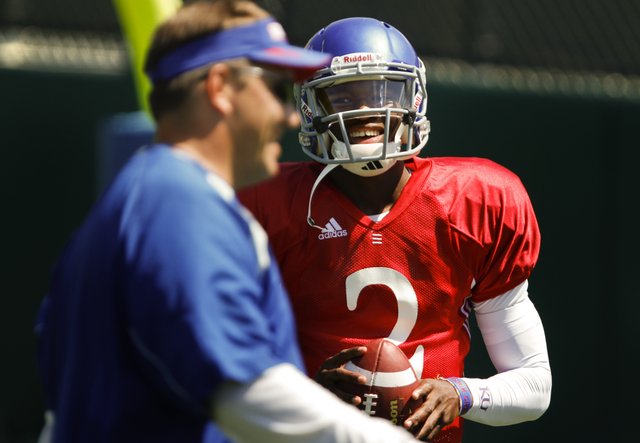 Kansas quarterback Montell Cozart has a laugh with quarterbacks coach Ron Powlus during practice on Monday, August 11, 2014 at the practice fields.

Just about everybody looks great in batting practice and then the game starts and pitches designed to deceive arrive in unpredictable locations. The same can be said to some extent about quarterbacks in training camps, where they seldom have to worry about getting hit and everybody in the stadium is on their side. And then the game arrives and the goal of the guys on the other side of the line of scrimmage becomes rocking the QB’s body and mind with hits that leave the sound of footsteps echoing for hours.

Young in the face but wise where it counts, Montell Cozart spent the past few months fine-tuning his game so he would be ready for showtime. By Matt Tait