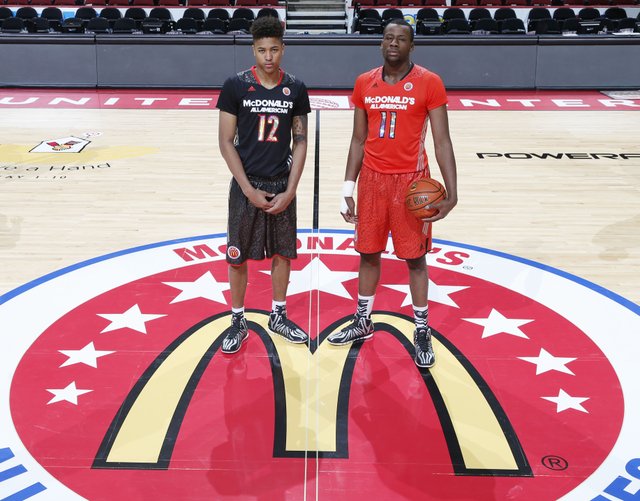 KU’s Self: It’s not fair to compare

Last week, at the NBA Draft in Brooklyn, New York, Kansas coach Bill Self cautioned against making unfair comparisons when it comes to searching for replacements for former Jayhawks Andrew Wiggins and Joel Embiid, the No. 1 and No. 3 picks in this year’s draft. By Matt Tait

ESPN.com has listed five programs that will be “most reliant on freshmen” during the 2014-15 season. Surprise: Kentucky is not one of them. By Gary Bedore

Alexander still No. 4 in final ranking

Kansas University basketball signee Cliff Alexander kept his No. 4 national ranking, while Kelly Oubre jumped from 12th to sixth in Rivals.com’s final ratings of the high school recruiting Class of 2014. By Gary Bedore

The United States Junior National Select Basketball Team will try to snap a two-year losing streak against a collection of international high school players 19 and under during tonight’s Nike Hoops Summit, set for a 6 p.m. tip on ESPN2, in Portland, Ore. By Gary Bedore

ESPN’s Reggie Rankin proclaimed Cliff Alexander and Kelly Oubre as “best finishers” of the 24 high schoolers who competed, and others raved about the two future KU players, who took part in Wednesday's McDonald's All-American Game. Notes by Gary Bedore