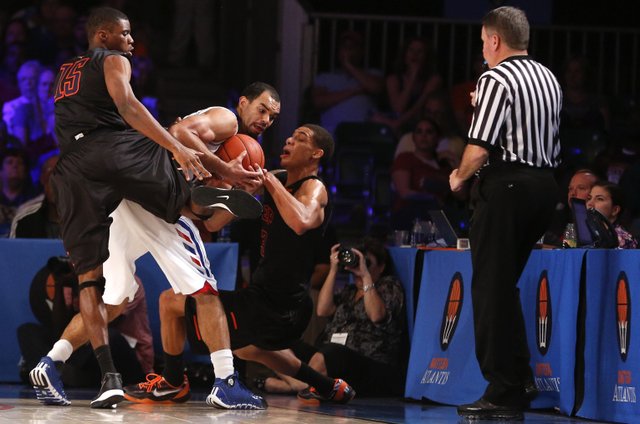 Kansas forward Perry Ellis is fouled after being surrounded by UTEP defenders Tevin Caldwell (15) and Vince Hunter on the Jayhawks' final inbound pass on Saturday, Nov. 30, 2013 in Paradise Island, Bahamas.

UTEP used gimmicks out of necessity

First, it was the stall on offense. Then it was the triangle-and-two zone defense. Coach Tim Floyd's ploys nearly earned UTEP a comeback victory against the No. 2 Jayhawks before the Miners fell, 67-63, in the third-place game at the Battle 4 Atlantis.By Benton Smith

A narrow victory over UTEP in the third-place game of the Battle 4 Atlantis Tournament was no cause for celebration for Kansas University’s basketball players, coaches and fans on Saturday in Imperial Arena in the plush Atlantis resort. By Gary Bedore