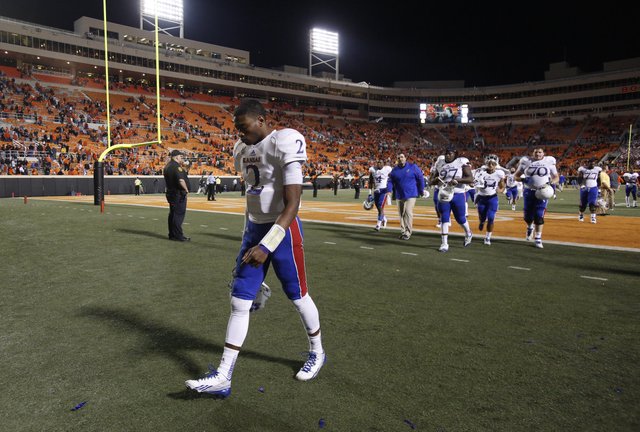 Kansas quarterback Montell Cozart hangs his head as he walks off the field following the Jayhawks' 42-6 loss to Oklahoma State on Saturday, Nov. 9, 2013 at Boone Pickens Stadium in Stillwater, Oklahoma.

Several Kansas University football players and coaches have adopted the slogan “It’s time” as the unofficial mantra for the 2014 season. Media members who cover the Big 12 Conference aren’t so sure. The Jayhawks, for the fourth year in a row, were picked by the media to finish last in the conference in 2014.

Thirteen seconds. That's all it took the Oklahoma State football team to demonstrate that Saturday would belong to the Cowboys and not the Jayhawks, who dropped their 27th consecutive Big 12 game, 42-6, in front of 58,476 fans at Boone Pickens Stadium. By Matt Tait