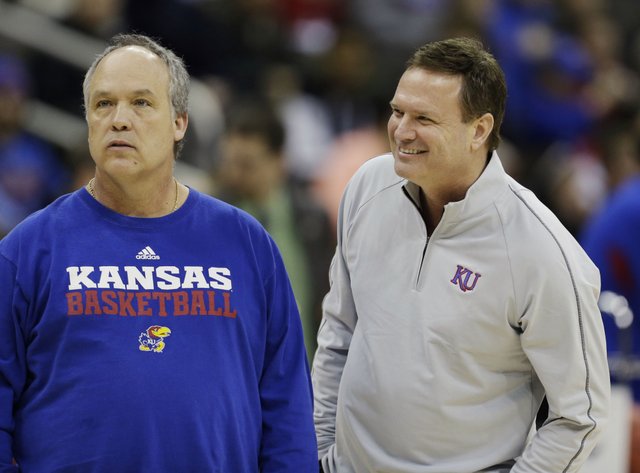 Kansas coach Bill Self, right, peeks around assistant coach Doc Sadler during practice for a second-round game in the NCAA basketball tournament at the Sprint Center in Kansas City, Mo., Thursday, March 21, 2013. Kansas is scheduled to play Western Kentucky on Friday.

Hall of Fame Material: Doc Sadler says Bill Self same (sarcastic) guy as the day he met him

Although he would prefer for his team to be traveling there with him, Kansas basketball coach Bill Self will be in Arizona this weekend, when he will find out if he will be included in the Class of 2017 for the Naismith Memorial Basketball Hall of Fame. During the next several days, in a series examining Self’s path to the Hall of Fame, the Journal-World will explore a few of Self's best qualities with some of the people who know him best. By Tom Keegan

Self in market for new director of basketball operations

Kansas University director of basketball operations Doc Sadler has been mentioned as a possible candidate for a full-time assistant coach opening on Iowa State’s staff. Notes by Gary Bedore