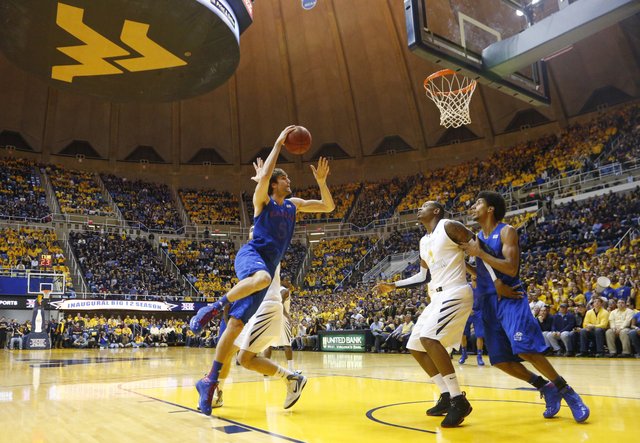 Jeff Withey (5) shoots a hook shot around a defender as Kevin Young (40) positions for a rebound in the Jayhawks 61-56 win against the Mountaineers Monday night at West Virginia University.

Kansas coach Bill Self promised he wouldn't burn KU's blue monocromatic alternate jerseys. Though it wasn't always pretty, KU did come away with a 61-56 victory over West Virginia on Monday to increase its win streak to 18 games. By Gary Bedore • Box score• KU coach Bill Self postgame audio

Rock Chalk!! You boys gave me a 2 glass of wine night last night--Whew it was 2:00 am before I calmed down enough to go to sleep. My husband takes it to the bank when he gets the overall feeling we have the game won. Well, last night he took it to the bank after the first quarter, he was sweating a bit by the time the game was over, but he told me not to worry, he's never missed. Sure glad we won, guys!!! You are so much fun to watch, love the way you play together! Put the Cowboys away early!!!