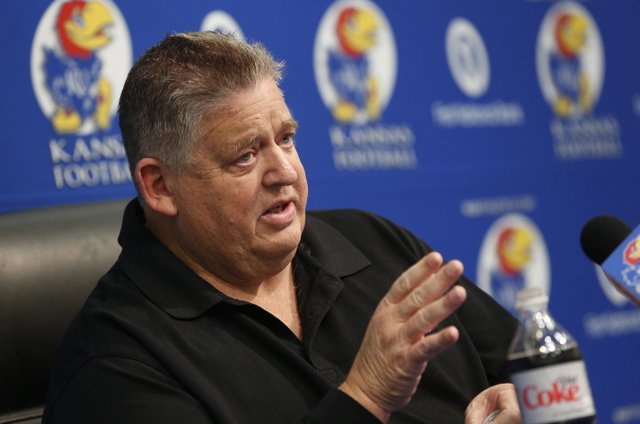 Jayhawks will get early look at SEMO

In a sense, the 2014 Kansas University football season starts tonight. No, the Jayhawks won’t be in uniform, under the lights with the roar of the crowd and smell of tailgating in the air. But their first opponent of the season will be.

After spending most of May recruiting the Class of 2015 and beyond, Kansas University’s football coaches are set to transition into the first true act of the 2014 season. By Matt Tait

When Kansas University’s football team takes the field at 1 p.m. today at Memorial Stadium for the annual spring game, it will do so with a handful of instructions from coach Charlie Weis and his coaching staff. By Matt Tait

With the exception of a week off for spring break in late March, the past five weeks have included a lot of prodding and probing for Kansas University’s football program.

While the installation of a new offense and the transition to new offensive coordinator and offensive-line coach John Reagan and wide receivers coach Eric Kiesau have been among the biggest story lines of Kansas University's spring thus far, the forward movement of a defense that made positive strides in 2013 has operated a little under the radar. By Matt Tait

During his first two seasons as the head coach at Notre Dame, current Kansas University football coach Charlie Weis led the Irish to back-to-back BCS bowl berths in 2005 and 2006. As college football’s BCS era came to a close Monday night with Florida State’s thrilling victory over Auburn, Weis was a part of the BCS fun one last time. Weis joined ESPN analyst Keith Olbermann in studio to break down the game and usher in the NCAA’s new College Football Playoff days. By Matt Tait