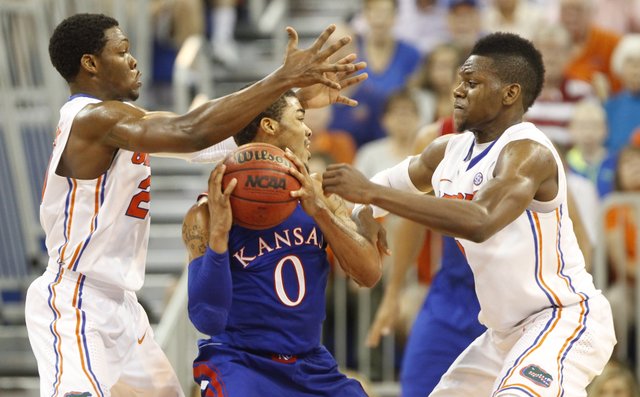 Kansas guard Frank Mason is caught between Florida defenders Michael Frazier II, left, and Will Yeguete during the first half on Tuesday, Dec. 10, 2013 at O'Connell Center in Gainesville, Florida.

Self: KU reacting too slow vs. zone

Kansas University’s basketball rotation players work on attacking the zone defense regularly at practice. That just hasn’t been evident in the past two games — Saturday’s 75-72 loss at Colorado and Tuesday’s 67-61 setback at Florida — in which the Jayhawks labored offensively. “The ball sticks now. Guys are indecisive,” KU coach Bill Self said Wednesday, noting, “we haven’t reacted very well." By Gary Bedore

Going with four freshman starters for what is believed to be the first time in Kansas University basketball history looked like a fine game plan against Florida on Tuesday night in O’Connell Center. “It wasn’t who we started that was the problem. We were up 10-3,” KU coach Bill Self exclaimed after the Jayhawks’ group of rookies Joel Embiid, Frank Mason, Wayne Selden and Andrew Wiggins plus sophomore Perry Ellis opened strong, then were victimized by a 21-0 run during a 67-61 loss to the Gators. By Gary Bedore