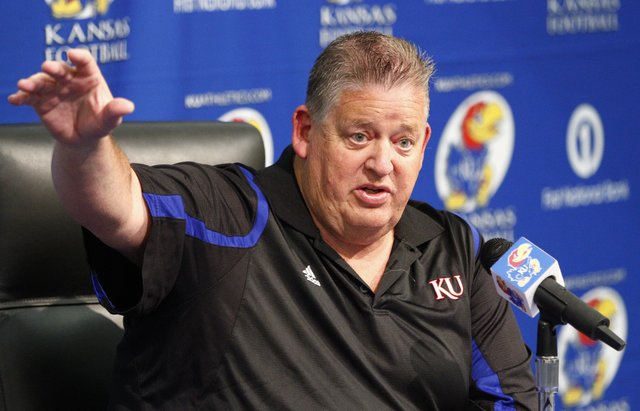 Kansas head football coach Charlie Weis goes over his depth chart and other changes to his team with an audience of media members on Wednesday, Aug. 7, 2013.

Jayhawks get extra week to get ready for opener

Whether they start Friday night, like Kansas State and Texas Tech, or Saturday like seven other league teams, nine of the 10 Big 12 Conference football coaches made the transition from offseason to game week on Monday. Kansas University's Charlie Weis is the exception.By Matt Tait

Opinion: Some of the top questions surrounding Kansas football

Charlie Weis today gives his last news conference until game week, and if I don’t write down all the questions I have about his Kansas University football team, I might forget a few when it’s time to ask them. So here goes. By Tom Keegan

At his opening news conference of fall camp, Kansas University football coach Charlie Weis revealed that all but two of KU's more than 20 incoming junior college players had made it to campus and were cleared for practices. By Matt Tait

After typing up 67 minutes worth of Cliff's notes, I paid the price for not saving by losing every one of those words. Lesson learned.