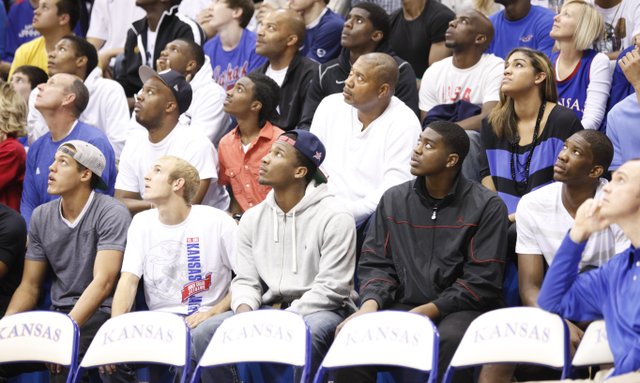 Wayne Selden, middle front row, sits behind the bench during Late Night in the Phog on Friday, Oct. 12, 2012 at Allen Fieldhouse. Selden was one of 24 players selected for the 2013 McDonald's All-American game.

Freshman Wayne Selden was sold on Kansas University after watching the 2012 Late Night in the Phog. This year, he’ll be meeting a batch of prospects with KU on their lists. By Gary Bedore

Selden: Nothing painful about process of picking KU

Kansas University freshman Wayne Selden says picking KU was an easy choice once he visited for Late Night in the Phog. By Gary Bedore

Wayne Selden, the second-highest-ranked recruit in Kansas University's next basketball recruiting class, sizes up his classmates. By Tom Keegan

McDonald's All-American Wayne Selden next up for KU hoops

Kansas University’s men’s basketball recruiting Class of 2013 is currently ranked No. 2 in the country by ESPN.com.

Just watched the documentary on the Rules of Basketball. AWESOME!!!!!!!!!!!!! Not jsut for Ku basketball but for ALL college basketball! The rules will always be and should always be in Lawrence, Kansas!!!!!!!!