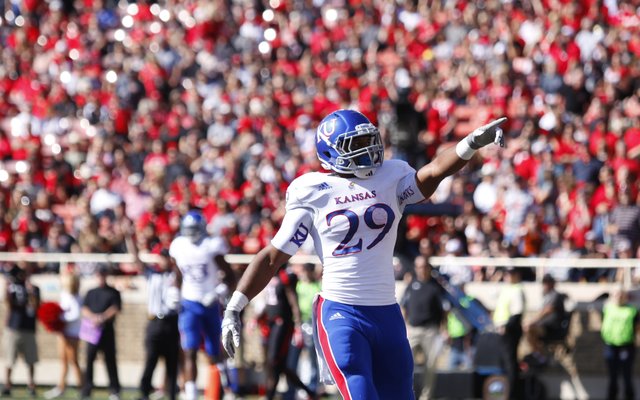 Kansas running back James Sims salutes a pack of KU fans after his touchdown against Texas Tech during the first quarter on Saturday, Nov. 10, 2012 at Jones AT&T Stadium in Lubbock, Texas.

Former Kansas University running back James Sims was not drafted during this weekend's NFL Draft. But shortly after the seven-round affair ended, Sims agreed to a free-agent deal with the Green Bay Packers.

The arrival of June often marks the beginning of the prediction season for the upcoming college football campaign, and the first batch of predictions regarding the Big 12 Conference are now out. Notes by Matt Tait

The Kansas University football team won just one game all season and saw its Big 12 losing streak grow to 21 games in 2012, but the league's coaches and media members who cover the conference saw enough to name four Jayhawks to the second-team All-Big 12 postseason squad.

They don't have a flashy nickname just yet, but KU running backs James Sims and Tony Pierson have emerged as KU's version of "Thunder and Lightning." By Matt Tait