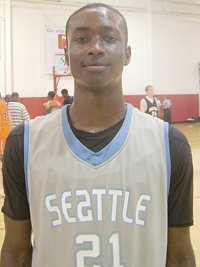 Anrio Adams, the sixth and final member of Kansas University’s incoming recruiting Class of 2012, will report to campus today and attend classes on Thursday, KU coach Bill Self told the Journal-World on Tuesday.

Anrio Adams, the Associated Press Class 3A basketball player of the year in the state of Washington, should be able to make an immediate, major impact at Kansas University during the 2012-13 season.