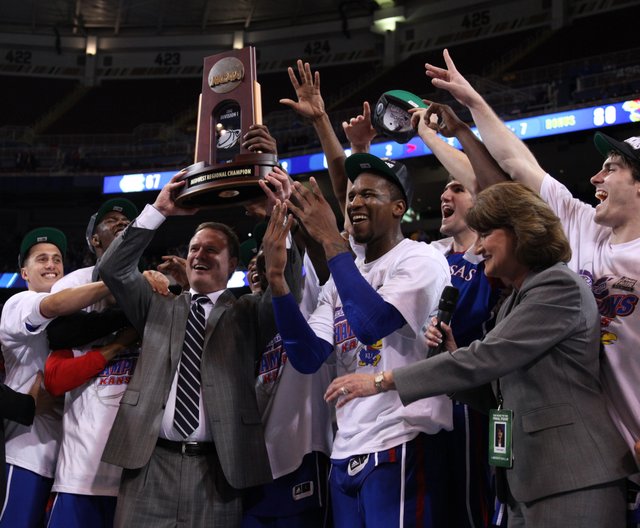 Kansas players crowd around head coach as they are presented with the Midwest Regional trophy as they celebrate the Jayhawks' 80-67 win over North Carolina to advance to the Final Four on Sunday, March 25, 2012 at the Edward Jones Dome in St. Louis.

Unless and until the NCAA, its affiliated television networks and all media covering college basketball denounce and distance themselves from the dreaded RPI rankings, March Madness seeding won’t approach anything that resembles fair. By Tom Keegan

Kansas University basketball coach Bill Self motioned wife Cindy, daughter Lauren and son Tyler onto the court as his Jayhawk players partied on the podium after an 80-67 Elite Eight victory over North Carolina on Sunday in Edward Jones Dome. “Unbelievable,” Self said as he hugged and kissed Cindy.

KU players know it pays to listen to Bill Self

Not a single McDonald’s all-American on the roster, a first for Kansas University basketball coach Bill Self since he left Tulsa. Just one returning starter on a team that lost two lottery picks and another NBA draft choice. The two top recruits declared academically ineligible for the season.