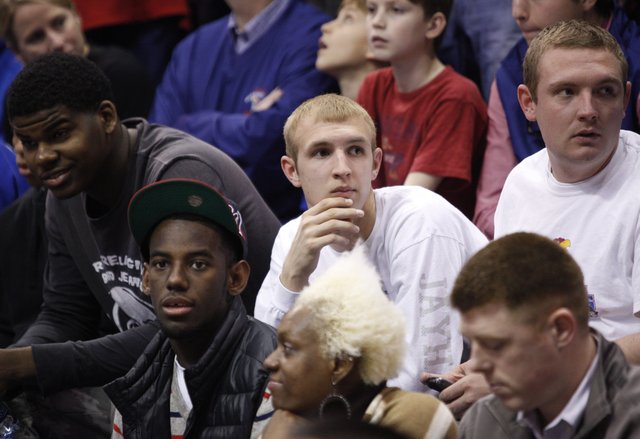 Kansas commit Conner Frankamp, center, watches from behind the bench prior to tipoff against Missouri on Feb. 25, 2012, at Allen Fieldhouse.

With the scoreboard clock running, Marty Frankamp fires a pass to his son. “Forty seconds left,” Marty says. “No more misses.” Conner — a senior at Wichita North High School and a Kansas University basketball commit — doesn’t say a word. He catches the pass and puts up a three from the left wing. Swish.

Rivals.com released its updated 2013 basketball recruiting rankings earlier this month, and Kansas commit Conner Frankamp moved up from No. 42 to 28 while fellow KU commit Brannen Greene remained at No. 31. Rivals.com national recruiting analyst Eric Bossi, who has been on the road more than 50 days since mid-March evaluating high-school players, took some time to talk about the new rankings and also the potential for KU coach Bill Self to have a strong recruiting class in 2013.