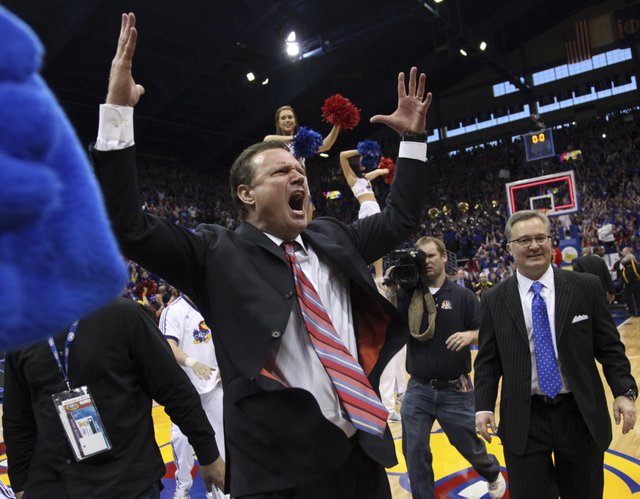 Kansas head coach Bill Self raises up the fieldhouse following the Jayhawks' 87-86 overtime win over Missouri on Saturday, Feb. 25, 2012.

The Border War is back. Officially called The Border Showdown these days, the annual clash between longtime and bitter rivals Kansas and Missouri will return to the men’s basketball schedule beginning with the 2020-21 season. By Matt Tait

For KU's Bill Self, passion for winning remains the same from win No. 1 to the brink of 600

Before the 2008 national championship, the Big 12 title streak, the 210 wins at Allen Fieldhouse and the 599 career coaching victories at four different stops, there was James Kruse, Earl McClellan and a whole bunch of Oral Roberts Golden Eagles just like them. By Matt Tait

The Kansas men's basketball 87-86 overtime victory over Missouri on Feb. 25 has been nominated for "Game of the Year" in this year's ESPY awards, ESPN announced Wednesday.

Bill Self named Naismith national coach of the year

Kansas coach Bill Self was named the 2012 Naismith men's basketball coach of the year, the Atlanta Tipoff Club announced Sunday.

Thrusting his arms into the air while peering into the Allen Fieldhouse stands, Bill Self let out a primal scream as the final horn sounded in Kansas University’s 87-86 overtime victory over Missouri on Saturday afternoon.