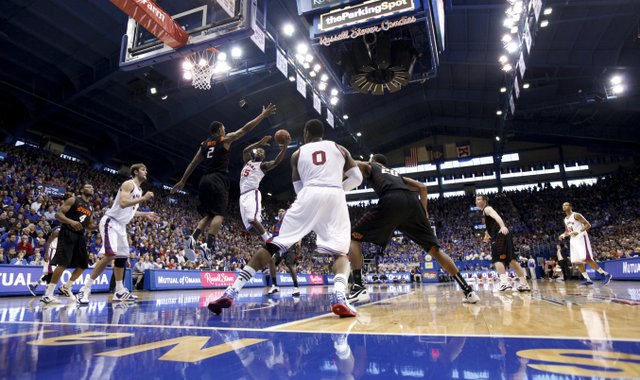 Kansas guard Elijah Johnson swoops into the lane under Oklahoma State forward Le'Bryan Nash as the Jayhawks work against a zone defense during the second half on Saturday, Feb. 11, 2012 at Allen Fieldhouse.

Allen Fieldhouse to get new HD video board

Fans in attendance at Allen Fieldhouse for the annual “Late Night in the Phog” event on Oct. 12 will be the first to experience a new high-definition (HD) video board and control room inside Kansas University's home basketball arena.

The Kansas men's basketball team moved up three spots to No. 4 in the Associated Press poll, while jumping five spots to No. 5 in the ESPN/USA Today coaches poll. Both rankings were released Monday.

Offense nice, but for Elijah Johnson ‘D’ is key

Elijah Johnson admits it was nice to see his shot go down a few times during Saturday’s game. Still, the Kansas University junior guard says his offense isn’t his focus.