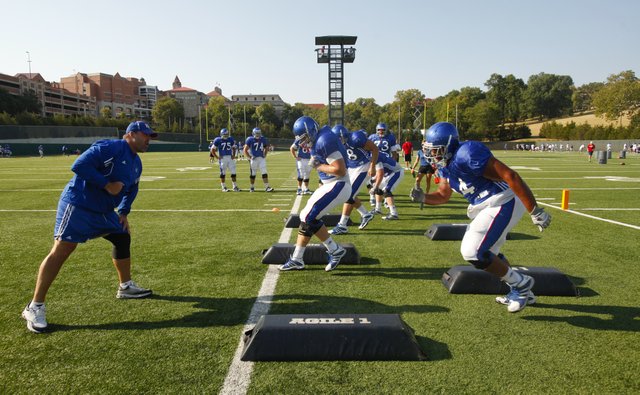 Kansas University offensive line coach Tim Grunhard won a national title as a player at Notre Dame and fought through 11 seasons in the NFL as a member of the Kansas City Chiefs. Neither was as tough as what Grunhard went through last season as a first-time college football coach. By Matt Tait

Nothing beats an offensive line with a few fifth-year seniors loaded with game experience. Kansas University's football team had three blockers last season who combined for 110 starts in their careers. Now they're gone, but hope is not. Column by Tom Keegan

The hidden, swollen-knuckle world of line play, where the dirtiest, nastiest shots are taken and given, is no place for softies. It’s a mean place where Tim Grunhard thrived for Notre Dame and then the Kansas City Chiefs, but he has seen much nastier places.