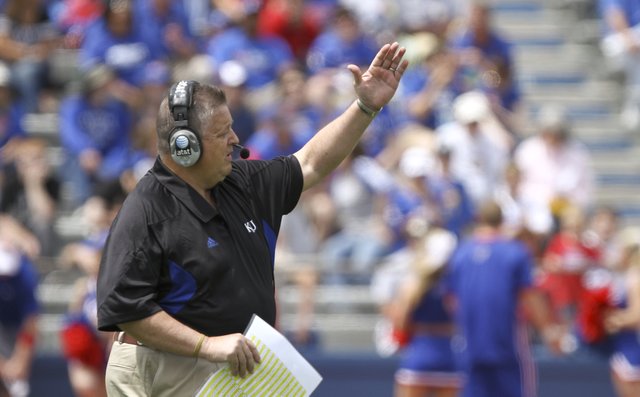 By now, we all know that Kansas University athletic director Sheahon Zenger is a big fan of new football coach Charlie Weis. But it turns out Zenger’s admiration for Weis is far from a one-sided deal.

It’s early to draw any concrete conclusions on where, other than in the home state and neighboring Missouri, the new Kansas University football staff will concentrate its recruiting efforts. But it’s not too early to get a hint. Thus far, it looks as if the Charlie Weis recruiting net will more closely resemble Glen Mason’s than Mark Mangino’s.

Man with a plan: Weis making impression beyond field

We all know about the Notre Dame transfers, the big-time quarterbacks and the changes he made to the Kansas University football roster. But six months after he was hired, the impact of new KU football coach Charlie Weis goes far beyond a simple reshaping of the rules and roster.

Saturday’s 45-0 romp by the first-string Blue team in Kansas University’s annual spring game marked the final activity of one of the most intense and trying springs at KU in recent memory.