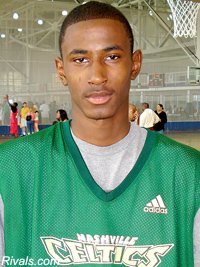 DeAndre Daniels, the No. 10-ranked player according to Rivals.com in the class of 2011.

No telling when saga with prep will end

No. 10-rated basketball prospect DeAndre Daniels will sign a financial-aid agreement with a college at some point.

DeAndre Daniels, a 6-foot-8 small forward from IMG Academies in Bradenton, Fla., has delayed his decision on a college until Thursday morning.

Glad it's a done deal. I'm sick and tired of his anticks, do we really one a flake like that? His arrogant attitude isn't what our team needs. He's a one & done anyway. I'll take our players anyday over him. boys with character and pride. We're OK, really looking forward the coming season.