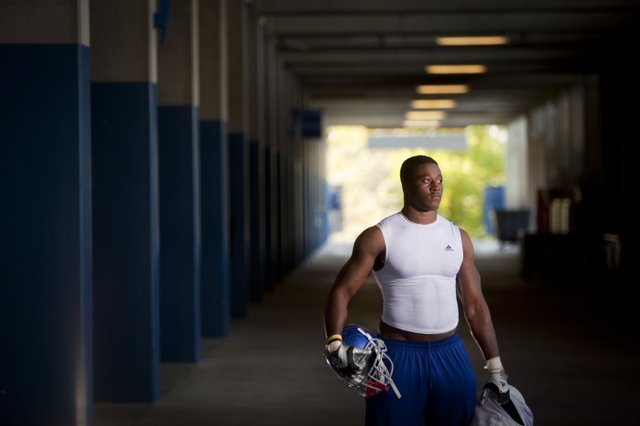 Steven Johnson has benefited from his determination to work through various injuries. After tearing the ACL and LCL in his knee in high school, Johnson didn’t know whether he’d be able to play football again. His perseverance led him to being an invited walk-on at Kansas. He received a scholarship offer one year later in his sophomore year. This year, his junior year, Johnson will be starting at linebacker.

Steven Johnson sits on the steps on the north side of the Kansas University football practice facility, his arms resting on his knees in front of him. The junior linebacker — with brown eyes, curly black hair and a few scraggly hairs on his chin straining to form a goatee — wants to talk about the upcoming season.

Great article!! And even greater young man. Brought tears to my eyes just thinking of his struggle. My son was a walk-on and it's tough, lots of hard work, but no scholarship benefits, no training table, he use to go to the dorm after practice and the ladies would save him food in a styrafoam container. I work at a Community College and I wish Steven could come talk to some of our prem-a-donna's. I wish Steven the best and hope he has a fantastic year--he certainly deserves it. Kerry Maier is another great human being. I just hope he knows how much we all admire him.

Hands down my favorite article I have read on this site. If the Jayhawk Football Team can adopt this players work ethic, faith, and perserverance then the sky is the limit. I believe that Coach Gill and Staff will provide the environment where athletes are encouraged to grow and improve on a daily basis.