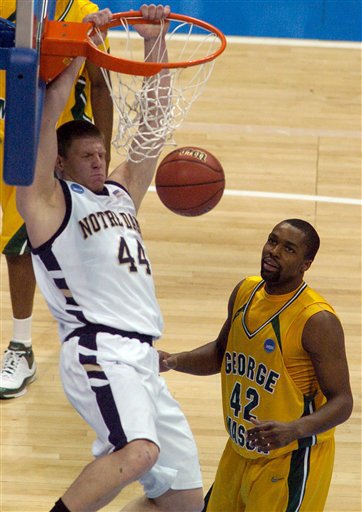 Notre Dame forward Luke Harangody, left, hangs from the rim after dunking the ball as George Mason forward Folarin Campbell looks on in the second half of Notre Dame's 68-50 victory in a first-round NCAA East Regional basketball game in Denver on Thursday, March 20, 2008.

Looking for the next George Mason? Sad to say, but it won't be George Mason. America's NCAA darling two years ago was just another first-round underdog this time around - overmatched and never really in it Thursday night in a 68-50 loss to Notre Dame in the East Regional.