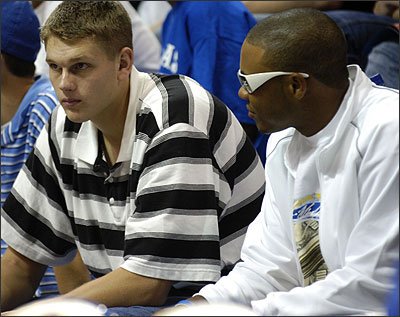 Minnesota high school standout Cole Aldrich, left, sits with former KU recruit C.J. Henry during the 2005 Late Night in the Phog. Henry will join up with Aldrich as a member of the Jayhawks next season.

Terrific talent Tyshawn Taylor sometimes looked as if he got caught standing up when he should have been locked in a defensive stance. Taylor’s coach let him have it for such lapses, but it’s not as if Bill Self could have replaced him with close to an equal talent. Now he can, which is one reason Taylor will push himself harder to remain in that defensive stance longer.