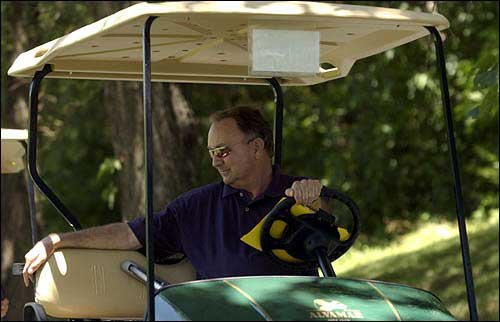 Kansas University golf coach Ross Randall watches the 2003 Be Like Bob Memorial at Alvamar from his golf cart in this file photo.

It’s now officially a tradition. For the second year in a row, more than two dozen former KU golfers, many of them teaching professionals today, got together for a one-day event to honor their late head coach, Ross Randall.

The mad scientist in long-time club pro Jeff Burey has come up with another terrific idea for an unconventional, entertaining day of golf.

Ross Randall, Kansas golf coach for 28 years before stepping down in 2007, died of an apparent heart attack Friday night in the Florida home he shared with wife Linda.

Ross Randall, who has been involved in the Kansas University golf program for the last 30 years, announced his retirement on Tuesday.

Kansas' Randall in class of his own

Sure, wins and losses fill the top line of any college coach's resume, but the list of qualifications can't stop there. For example, never doing anything to embarrass the university comes with the job description. Comport yourself in public with class, dignity and a constant awareness that what you do affects not just your own reputation, but that of the athletic department and the entire university. Which brings us to the Kansas University men's golf coach.

Ross Randall wasn't able to golf at the Be Like Bob Memorial tournament over the weekend at Alvamar. But Kansas University's 25th-year men's golf coach -- whose health has been subpar the past five months -- was able to drive a cart around the course and serve as a spectator as he continued his remarkable comeback from life-threatening ailments.