Kansas women’s basketball knocks off No. 13 Texas in Austin 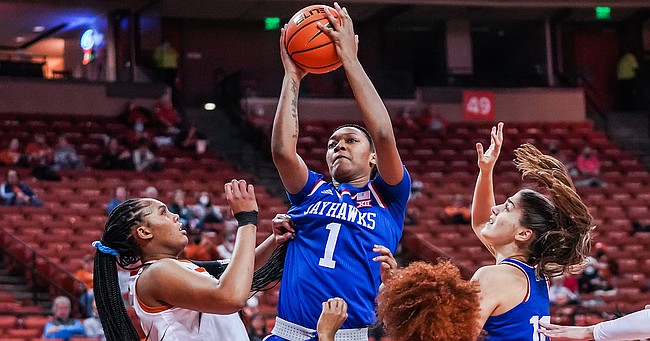 KU forward Taiyanna Jackson handles the ball high above her head in traffic during the Jayhawks game against Texas on Wednesday, Jan. 12, 2022 in Austin, Texas.

The Kansas women’s basketball team picked up its first win over a ranked opponent since 2018 on Wednesday night, knocking off No. 13 Texas, 70-66 in overtime in Austin, Texas.

The victory marked KU's first win in Austin in 10 years.

“I’m just really happy for our players," KU coach Brandon Schneider said after the win. "They worked really hard. Their focus over the past few days has the best I have ever seen. It just says a lot about the growth of our team and the leadership of our team.”

Although UT won the rebounding battle (38-32), KU’s 36-14 edge in points in the paint proved to be a huge part of the upset victory.

Nine of the 10 Jayhawks who played on Wednesday night cracked the scoring column and those same nine players all recorded at least two rebounds.

KU led 59-56 with 1:07 to play in regulation after Kersgieter drained her lone 3-pointer of the night off of an assist from Franklin. But the Longhorns tied it up at 59-all on a 3-pointer by Aliyah Matharu with nine seconds to play.

KU got a stop after Kersgieter’s triple and had a chance to push the lead to two possessions, but Thomas missed a jumper with 29 seconds to play, which allowed Texas to tie the game and send it to OT.

Kersgieter scored six of her 19 points in overtime, helping Kansas claim leads of 66-61 and 69-63 before holding on for the win. Franklin opened the extra session with a 3-pointer to give KU a lead it would never relinquish.

Next up, Kansas will play host to No. 14 Baylor at 2 p.m. Sunday at Allen Fieldhouse.

Awesome! Congratulations, Jayhawks. Feels like the corner has finally been turned. And, with OU knocking off Baylor, that loss to the Sooners even looks a little less ugly..

Beating the Longhorns on their way out of the Big 12 is extra special. Congratulations. Continue your dominance of the state of Texas. Baylor is next. Rock Chalk.

Upside down horns are in vogue

Should be able to get Baylor. Kim Mulkey is gone and they are coming back to Earth quickly.

It’s always good to get a road W, and all the more so against a ranked opponent, especially ut. I’m not sure the corner is turned with 1W, but it’s nice to at least be in sight. A brutal week continues with Baylor in the Phog.