Quick Gamer: Kansas recovers with strong 2nd half in 74-63 win at Oklahoma State 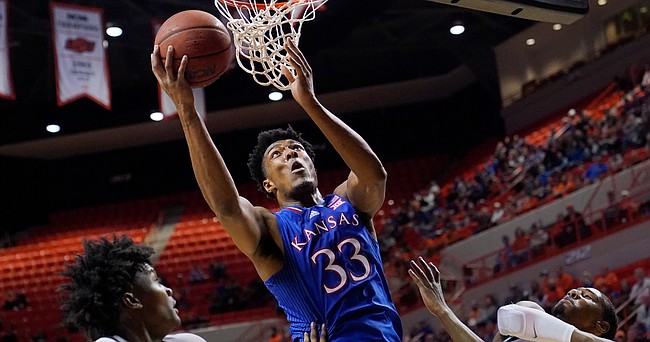 Stillwater, Okla. — The prettiest part was the outcome for sixth-ranked Kansas in a gritty 74-63 win over Oklahoma State on Tuesday night at Gallagher-Iba Arena.

Despite 43% shooting from the floor and a scoreless drought of nearly 10 minutes — including the final 9:12 of the first half — the Jayhawks (12-1 overall, 1-0 Big 12) found a way to win with some timely buckets and much better poise in the second half.

The victory extended KU’s streak of conference-opening wins to 31, dating back to the 1991-92 season.

Nineteen of those 31 wins have come on the road and three of them have come against the Cowboys, who fell to 7-5 overall and 0-1 in Big 12 play.

Coming off the bench for the first time this season, Kansas senior David McCormack delivered several of those buckets, scoring 17 points and grabbing 15 rebounds on 7-of-13 shooting in 23 minutes as a reserve. 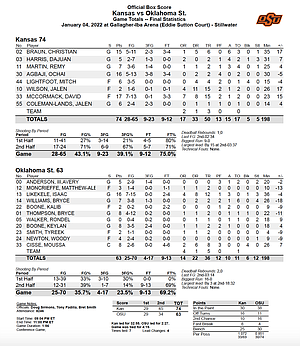 Asked after the game what his purpose was on Tuesday night, McCormack said, simply: “Be a defensive presence and rebound.”

Added Agbaji of McCormack’s night: “It was great,” I didn’t know he had 15 rebounds until we came into the locker room at the end. He was spectacular.”

Jalen Wilson, who shot just 1-of-6 on the night, also added 15 rebounds for Kansas, which held OSU to 36% shooting on the night.

McCormack surrendered his starting spot in favor of KU senior Mitch Lightfoot but remained calm and confident and found himself on the floor when it mattered most on Tuesday. 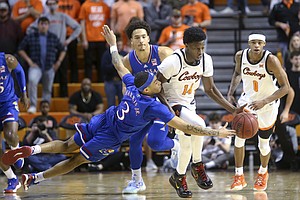 Arguably the game’s biggest moment came with 9:35 to play, when KU senior David McCormack, benched to start in favor of Mitch Lightfoot, ripped down a 2-handed rebound of a missed shot by Jalen Coleman-Lands and went right back up for the and-one bucket. The bench roared, — Lightfoot the loudest — McCormack hit the free throw and Kansas led by a dozen again after seeing its 29-15 first-half lead reduced to zero as the team’s entered halftime tied at 29.

Kansas missed 19 consecutive shots to close the first half, but Agbaji said KU coach Bill Self’s message at halftime was more encouraging than anything.

Added Self: “To win a game on the road and miss 19 straight shots, that’s not going to happen very often.”

Oklahoma State ended the first half on a 14-0 run and extended the run to 16-0 with a bucket on the first possession of the second half.

KU senior Mitch Lightfoot’s basket down low at the 19:24 mark of the second half (on KU’s first possession) went down as the first points for Kansas in 9:49 of game time.

The Jayhawks had an additional 15 minutes of clock time to think about their offensive ineptitude during the halftime break.

KU shot just 28% in the first half and finished on the wrong end of a 14-0 run by the Cowboys that featured the home team keeping Kansas without a point for the final 9:12 of the half.

Things got so bad offensively for the Jayhawks that one KU fan posted a poll on Twitter at halftime that asked, “Will Kansas make a shot in the second half?” The options for the answer were “No” and “Maybe.”

The flow of KU’s offense wasn’t much better to open the second half, but the Jayhawks found a little rhythm early on thanks to the play of Dajuan Harris Jr.

The KU sophomore picked up a bucket in close to tie the game at 40 and, on the ensuing OSU possession, swiped a steal that led to another 3-pointer by Agbaji. That gave KU a 43-40 lead and it grew to 50-43 after five points by Braun and a baseline jumper in close from McCormack.

“At this level, you have to have some sense of poise,” McCormack said.

Most of that run came with Agbaji (16 points on 5-of-13 shooting in 30 minutes) on the bench with three fouls.

The KU lead ballooned to double digits at the 11:25 mark, when Jalen Coleman-Lands scored his first points of the night, burying a 3-pointer from the wing to put KU up 53-43.

Making his first start of the season — and the ninth of his Kansas career — Lightfoot made a quick impact, recording four points and blocking a pair of Oklahoma State shots in the game’s first four minutes.

KU’s leading scorer, senior Ochai Agbaji was red-hot to open the game, knocking in a pair of 3-pointers and three free throws — after getting fouled on a 3-point try — in the game’s first five minutes.

He pushed his point total to 11 on a hard slash to the basket from the corner that put the Jayhawks up 18-11. In for Lightfoot, McCormack picked up the assist on Agbaji’s third bucket, rifling a two-handed pass to the senior on his way to the rim for the uncontested two.

McCormack was far from flawless in the first half, but that positive play appeared to settle him down a little.

He scored three consecutive buckets at one point, screaming toward his teammates on the bench after the third. The baskets came in a variety of ways, with a dunk, a hook shot in the post and a put-back.

That stretch put Kansas up 24-13 and left the Jayhawks with little more to like for the half’s final 10 minutes.

Despite the team’s struggles on Tuesday and McCormack’s own personal struggles for most of the season, there he was, on the floor with the Kansas offense largely running through him for much of the second half.

At one point, when Agbaji picked up his third foul of the game with 13:11 to play, KU was forced to play without its leading scorer and most reliable offensive option. But McCormack delievered when called upon during that stretch and a four-point lead when Agbaji went out had grown to a 59-51 lead when he checked back in. A few minutes later, after back-to-back buckets by Remy Martin, the lead was at a game-high 15 points (72-57) and the Oklahoma State fans started heading for the exits.

Kansas will head to Texas Tech this weekend for its second Big 12 road contest of the season.

A double double is a nice response. Start Prison Mitch for the rest of the year. It certainly didn’t hurt the D.

*Looks like coming off the bench is great for DMac!

*Is it possible to win and still feel like you lost? Any road win against Ok. St. is a good win though. Through the years we always seem to lose at that arena.

*Do they keep stats for most goal tending? If so, I am pretty sure DMac has the Big 12 record. He only had one goal tending call tonight (and one missed bunny). But when you grab 15 rebounds, all is forgiven.

*What was up with the refs? They really called a lop sided game in the 2nd half. The Cowboys were mugging KU left and right and they swallowed the whistle?

*KU is a great offense that can fall into the trap of over passing. Just shoot the ball already if you are open.

*Unpopular opinion: KU is a great defensive team that gambles a lot. They go for the steal or the flashy play and leave someone open. The other team make us pay for that. We are athletic enough that if often works out, but it's not a great long term strategy.

*Wilson has always been an incredible rebounder and all-around athlete. It's just so strange that both he and DMac have been in shooting funks.

*KU is a great offense that can fall into the trap of over passing. Just shoot the ball already if you are open.

*Looks like coming off the bench is great for DMac!

I agree it's too early to tell if having DMac come off the bench is truly productive. But it seemed to work last night. Also, he took the same shots he always does, he just happened to make most of his hooks last night.

Unpopular opinion is part of what Coach has been complaining about this year.

One of the most bizarre KU games I've ever seen. If you had told me that KU would blow a 14-point first half lead, miss 20 straight shots, and struggle to maintain possession of the ball in the final 3-1/2 minutes, and would still win, I'd have asked if you were snorting crack.

I'm glad we won this game. I hate Oklahoma State, and we've found lots of ways to embarrass ourselves in Stillwater in the Bill Self era. To lose to an OSU team that's been banned from the postseason and has nothing to play for would have been a new low in the KU-OSU series.

Very true. They even made special shirts for the KU game. It seems what they "had to play for" this year is beating KU (or Baylor?). Sadly, even with hosting KU, that was one empty arena. OSU played with heart even though no one came to the game.

These guys won by 11, despite periods of inadequate play. Imagine what KU is capable of with consistent high level play throughout the whole game.

Agree! I just hope we don't have a 9 minute scoring drought against Baylor. That won't end pretty.

We were fortunate to win this game, but there were some good things that come out of this. Harris... I like this kid a lot. The hustle he showed with the steal from his backside on the floor late in the game was spectacular and NBA scouts were probably foaming at the mouth at that play. Harris makes great decisions. DMAC had a big game coming off the bench. And we had 50 rebounds, 17 offensive rebounds. Even though it is true we were fortunate to win, OSU was also fortunate we didn't win by 25 or more because if we hadn't missed 20 straight shots and shot just 40% from the field, we would have won by at least that much. We did not turn the ball over that much in the first half, much of it came in the final 5 minutes of the game. It was not pretty, but we won. DMAC needs to come with that intensity every night and use his size and if the defense doubles him, pitch it to the open man for an open shot. Jalen Wilson is a beast on the boards as well, would like to see him score in the double digits as an average though, and if he does, it makes us a better team. Remy came alive late with some dagger shots. We were better from the free-throw line, 75%, but we had far fewer opportunities than most games this year. Got another hostile environment on Saturday in Lubbock, then in Norman. Was not that hostile last night with the students still gone for Winter break, but that probably will not be the case in the next two games. Much respect to OSU for their defensive effort, and it was pure effort that they gave. If our guys give that much effort for 40 minutes, it's going to be a great ending to the season!

Some musings: It appears we now have an 8 man rotation without Joe and the freshmen.
I expect Pettiford will get some time when he returns which demotes Jesufu even more. BTW, his bench demeanor is not good and I'm guessing he is out of here. Also, those who question Mitchs defense had to have another thought last night. OSUs energy on D is something for us to replicate. We now have two legitimate 16-18 point scorers, not 20-22. J-Will will join in. He'll even make a free throw or three. As usual, It's gonna be a tough home and home season in the Big Xll. It's still undecided as to who will prevail, but Baylor has really reloaded and they are deep and play both ends with high energy and purpose. Rock Chalk!