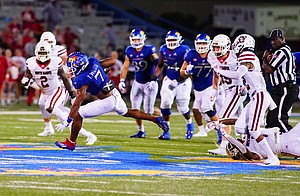 What an awkward set of questions.

Has he made a catch like this before? His response of "maybe" tells you that he's surely made plenty of catches in his career but can't really remember them. So why proceed to ask two more questions about that "maybe" catch?

That was crazy. He was doing better than a globetrotter routine running the ball across the other guys shoulders. Crazy concentration. It was hard to have a feel for it because he didn’t. And yet he got it back off the other guys back. Crazy!