A starting tight end for the Kansas football team once upon a time, back when he was a true freshman in 2017, redshirt senior offensive lineman Earl Bostick Jr. has played for three different head coaches since he got to Lawrence.

A starter up front on the O-line beginning in last season (initially at right tackle), Bostick settled in at left tackle late in 2020, and that’s where the 6-foot-6, 290-pounder from Barnwell, S.C., remains as head coach Lance Leipold and O-line coach Scott Fuchs try to rejuvenate one of the Jayhawks’ problematic position groups from a year ago.

Ahead of KU’s nonconference finale at Duke (3 p.m. Saturday, ACC Network), Bostick reflected on his career path and looked ahead to how KU’s O-linemen hope to make progress.

Q: When you were first recruited to KU, did those coaches recruit you as an offensive lineman or tight end?

A: “It was a situation where it was like both. But when I first got here, it was looking like O-line. But then it was like, ‘You know what, we can basically put you at a tight end.’ And I was grateful for the opportunity.” 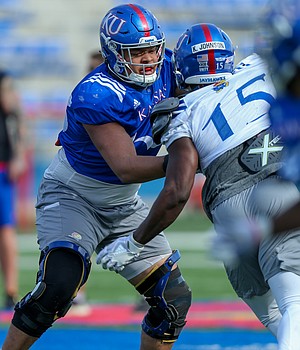 Q: Did you like playing tight end, and did you think that was going to be your future?

A: “I loved playing tight end. That was my high school position and stuff like that. I appreciated the old coaching staff giving me the opportunity to try to prove myself at tight end. But as of now, as an O-lineman I’m just trying to prove myself in this position.”

“You never know where they may need me at. So I’m trying to help the team as much as I can.”

Q: You’ve been starting on the O-line consistently for a couple years now. How far do you feel like you’ve progressed at that position now that you’re more established?

A: “I’ve progressed as an O-lineman pretty well, from just gaining the weight — probably like 40 pounds — carrying the weight properly, moving my feet, using my hands, stuff like that.”

“And from starting at right (tackle) and then moving back to the left (tackle), I know some people say it’s hard to do it. But I just feel like for me it’s a little simple. I just had to flip my feet and stances and stuff like that, and flip the play in my head. That’s all.”

Q: What are the biggest challenges that come with being the starting left tackle?

Q: What do you guys feel like the O-line needs to do to meet its full potential this year?

A: “The steps we need to take are basically having more chemistry. I feel like we need more time with each other. I know we only had about four weeks going into the season with fall camp, really, before we all just combined together.”

I understand the chemistry..."more time with each other" and everything, but, when you have a man in front of you that you need to block. That's the assignment. Just do it. Please!

Do linemen commonly just block the man in front of them? Seems a bit simplistic and not the scenario a DC would create. I don’t really know.