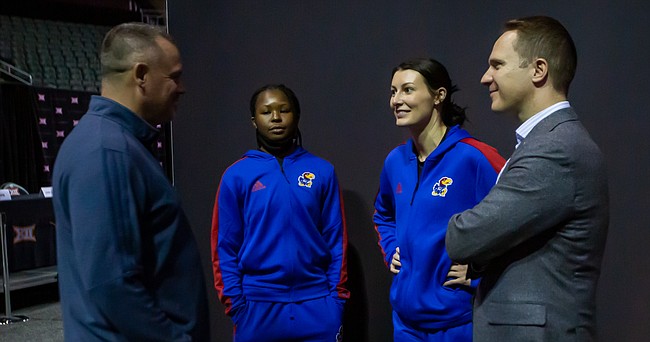 While that can make things interesting at any given practice and on road trips, two KU veterans who both speak only English said Tuesday that there’s just one language the group needs to communicate.

“Basketball is basketball,” junior guard Zakiyah Franklin said from T-Mobile Center on Tuesday at Big 12 Media Day. “We may all learn new terms, but it’s the same idea overall.”

With the start of the 2021-22 season now just a couple of weeks out, it’s that approach that Schneider and his team are taking to building a lineup that they hope is capable of making some noise in the Big 12.

“Most of our international players speak multiple languages,” Schneider said. “But for any freshman, whether you’re from Kansas City or whether you’re from Sibenik, Croatia, you’re learning basketball language. And right now we’re all just trying to get on the same page in terms of the basketball terminology and lingo that we use and just celebrating all the differences that we have, culturally, in our locker room.” 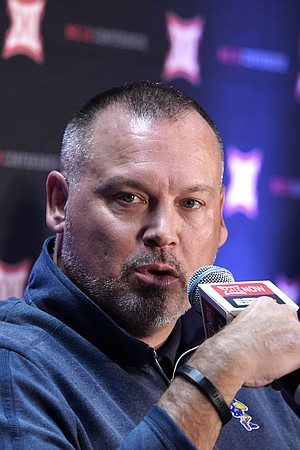 Later, when talking more about the multitude of languages he hears throughout a given day, Schneider noted that Macedonian freshman Matea Nikolic actually speaks five languages — English, Serbian, Macedonian, Spanish and Italian.

At least three or four others speak three or four languages, and there’s even super-senior guard Julie Brosseau, who hails from Quebec, Canada, and speaks both English and French.

The white board in assistant coach Terry Nooner’s office is the Grand Central Station or Ellis Island of KU’s cultural convergence.

“They all go in and write different phrases (in their native language),” Schneider said. “So that’s kind of the central location of the educational part of this.”

The Jayhawks also are in the process of learning what a normal basketball season looks like. For 10 of Schneider’s players, this month’s Late Night in the Phog was the first time they saw fans at Allen Fieldhouse. Schneider said his wife then pointed out that it also was the first time that those same 10 had even seen the bleachers pulled all the way out at KU’s home arena.

Although most of the Americans on the KU roster are limited to one or two languages at most, Schneider said they all make an effort to pick up what they can.

“It’s more about knowing when they’re cursing and if they’re talking about me than anything,” Schneider joked.

Junior guard Holly Kersgieter said Tuesday that the international athletes can use their native languages to their advantage.

“Oh yeah,” she said. “They’ll just yell right in the middle of practice.”

Every time, whether anyone understands or not, those moments typically produce at least some sort of laughter.

“We learn from them, they learn from us and it’s something that we really like,” Kersgieter said Tuesday. “It’s really interesting. We’re definitely diverse and we just have more things to talk about and learn about. We don’t see it as a challenge, it’s just something we get to learn from.”

In addition to being well-rounded culturally, Schneider and Kersgieter both said this was “the most complete team” they’ve been a part of while at KU.

Putting that talent together and using it to win games in January and beyond is the next challenge.

“I’m excited that I have 14 teammates who are bought in for the season as much as anyone, who are so excited and who work hard every single day,” Kersgieter said. “They want the best for not just themselves, but also their teammates, and the team chemistry is so much better.”

Despite those numbers, the new-look roster and the bond that has been built on KU’s diversity has Schneider hoping for better things in the months ahead.

“I think as a coach, it’s my job, as well as the rest of our coaching staff, to put our team in the best position possible to win the game that’s in front of us,” he said when asked if he felt pressure to win this season. “Do we have higher expectations? Absolutely. Are our standards higher? Yes. Far greater than what maybe people around the league think.”

To clarify the point, Schneider answered a little more concisely when asked during an appearance on a Sirius XM radio show what the team’s goals were for this season.

“We think we can be an NCAA Tournament team,” he said.

For a program that has not reached the postseason since the 2012-13 season, that kind of result would sound good in any language.

High hopes for this year’s women’s basketball team. The overall talent level and size looks to be improved, but as always the Big 12 is likely to be very competitive. The team GPA is also likely to be solid (impressed by the the number of student athletics who are fluent in multiple languages). Rock Chalk.

It's put up or shutup year for Schneider. No excuses.

My possibly simplistic impression of our teams of the past couple seasons has been that we have matched up evenly with the other Big 12 teams, with one glaring exception. That was that the other teams invariably had one WNBA caliber player (or more in the case of Baylor) who would inordinately stress our resources, and be the margin of defeat. This season, while I doubt that we have a matching WNBA level player to offset another team's super player, I believe we may actually match up favorably otherwise, as opposed to just evenly. On that basis, and hopefully it's true, I'm expecting a few Big 12 wins.