‘Nobody calls me Omar’: Why KU football’s O.J. Burroughs is always thinking about adding weight and his physical development

Almost every person associated with the Kansas football program calls O.J. Burroughs by his nickname. It’s O.J. on the official roster, and it’s O.J. out of the mouths of his teammates when they’re talking to the true freshman safety.

Burroughs said he’s currently playing in the KU secondary at 5-foot-10 and 173 pounds. Leipold said he reminds the young defensive back so frequently about the importance of adding weight to his frame over the next few years that Burroughs is probably sick of hearing about it.

But Leipold keeps bringing it up because he considers Burroughs one of the “exciting young freshmen” he inherited when he decided to try and rebuild the KU football program.

Remaining mindful of the long haul has been an emphasis with numerous underclassmen on the roster since Leipold took over and brought his former strength coach at Buffalo, Matt Gildersleeve, with him to KU. Burroughs happens to be a prime example of how the staff wants to invest in the physical development of a young player because the first-year safety is “not the biggest guy,” as Leipold said, and Burroughs already is good enough as a true freshman to be on the field and contributing. 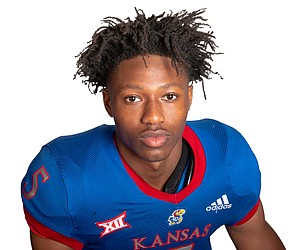 Ahead of Saturday’s homecoming game versus Texas Tech (3 p.m., ESPN+), Burroughs already has made one start at safety for KU (1-4 overall, 0-2 Big 12), totaled 11 tackles in his five appearances and forced a fumble against Baylor.

His coaches value how aggressive the young defensive back from Savannah, Ga., has proven he can be.

“He has outstanding ball instincts and ball skills,” Leipold said. “But the other part of playing safety is the physicality about playing the run and making tackles.”

KU defensive coordinator Brian Borland, who also serves as the staff’s safeties coach, met with Burroughs during the Jayhawks’ recent bye week. Borland said one topic that came up was that Burroughs wants to play faster in the secondary than he has so far.

Given that Burroughs is so young, Borland said it’s natural that he may still feel tentative at times, because he doesn’t yet have the reps and experience to read and react to what he’s seeing instantly and go make a play.

Nonetheless, Borland said he told the freshman safety he’s “really happy” with how Burroughs is playing. Before the season began, the D.C. said he was worried about how someone Burroughs’ size would be able to handle the physicality required on game days.

“He’s shown me that he’s capable of sticking his nose in there and getting the job done,” Borland said.

Burroughs, who played prep football at IMG Academy in Bradenton, Fla., said being a physical presence on the field hasn’t been a problem for him because he’s been playing the game his whole life.

An early arrival on campus helped pave Burroughs’ path toward being a factor for KU almost immediately as a true freshman. He enrolled for the spring semester and was able to go through workouts and the entire offseason practice schedule, while many Class of 2021 signees didn’t join the roster until the summer.

“When I first got here, he took me in,” Burroughs said. “Saturdays, early morning, even Sundays, we came in the indoor (facility) and just worked out.”

There were late night sessions, too, Burroughs added. They went through defensive back drills together, finetuning their back pedals and footwork, as well as how they break on the ball and their ball skills. Plus they watched extra video clips and put in additional weight-lifting sessions.

And all of that was even before Burroughs went through a 15-practice spring, under the guidance of holdovers from the previous Les Miles regime. 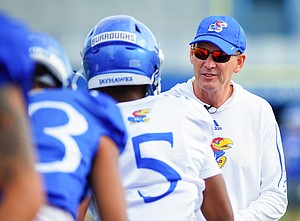 Once Leipold and Borland finally were able to coach players during preseason practices in August, they could see Burroughs was far enough along to be a part of this season’s defensive plans.

As the true freshman continues to gain reps in games and become more comfortable, Borland expects even more from Burroughs.

“I think you’ll see between now and hopefully the end of the year he’ll just continue to make strides,” the D.C. predicted. “I’m happy with what he’s doing. I can see that he’s going to have a big impact with our program for years to come.”

And Burroughs knows maximizing his potential for the future will involve heeding the advice of his head coach. Ideally, down the road, the safety said he wants to get his weight up to around 190 to 195 pounds by “lifting, eating the right food, eating a little more.”

But Burroughs might not have to wait that long for Leipold to call him O.J.

“I say I’ll call him Omar until he puts on 10 pounds,” the coach said. “It’s a good thing hopefully. We kid because we care.”

Burroughs said another Leipold go-to when they’re joking back and forth is the coach telling him to eat more. The freshman safety said he knows the coach is just trying to have a good time with him.

“I just keep telling him, ‘Coach, call me O.J. Nobody calls me Omar,’’’ a smiling Burroughs said.

It was good that Coach initially referred to OJ as such, and even clarified that OJ had told the reporter about being called Omar before Coach had any comment about it. That should be reassuring to the players that Coach will treat them with the utmost respect in public, outside the team, even if he teases them inside. It will be interesting to see what happens when OJ makes his weight.

It’s reassuring to hear the consistency in all his messaging and that it’s not just a word he uses.