ISU quarterback Brock Purdy set a school record with four touchdown passes in the first quarter alone. By halftime Purdy had completed 15 of his 18 throws for 216 yards and the Jayhawks were in a 38-point crater.

KU head coach Lance Leipold said after the loss while discussing ISU’s first half air attack that the Jayhawks’ corners — freshman Jacobee Bryant and redshirt freshman Ra’Mello Dotson started — “get a little tentative” at times. Leipold noted the defense has some young players in the secondary — true freshmen Jayson Gilliom, who made his first career start, and O.J. Burroughs also were involved at safety — who are still learning.

One of KU’s early mistakes in the blowout came in the secondary. Bryant tried to jump a Purdy pass for a potential interception on ISU’s first drive. He didn’t pull it off or create a deflection, and the play turned into the first of ISU’s eight touchdowns on a night the Cyclones posted a season-high 564 yards (274 passing). 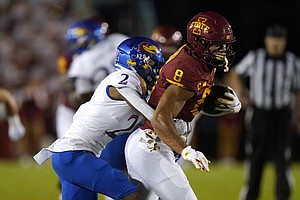 “Jacobee tried to make a play,” Leipold said. “One thing that’s a balancing act is I want our guys to continue to be aggressive and play with confidence and try to make plays.”

Leipold pointed out the ISU offense, through using motions and shifts and creating gaps, did a great job of forcing the Jayhawks’ defense to communicate and make checks.

With where the KU defense is at five games into Leipold’s rebuilding project, the players are still trying to get comfortable and confident in defensive coordinator Brian Borland’s system, the head coach said.

“(The Cyclones) have a tendency to get you when the communication’s not all there where you want and you’re susceptible to some bigger plays,” Leipold said. 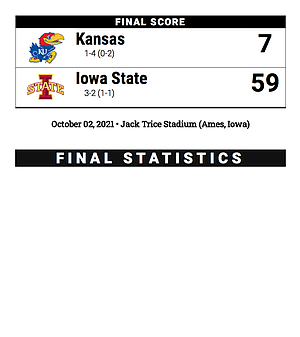 “Tackling in space is something we’ve got to continue to work on holistically,” he said. “Not just there, but our second line defenders, our second level defenders. Everywhere.”

KU super-senior nose tackle Sam Burt, who hurt his right arm in the season opener and has been sidelined since, no longer has his arm in a sling.

With the Jayhawks having some extra time before their next game — Oct. 16 versus Texas Tech — Leipold was asked how soon Burt might be back playing again.

KU’s athletic training staff, the coach added, updates him on Burt and lets Leipold know what the veteran defensive lineman can and can’t do physically as Burt goes through the recovery process.

“He’s started to do some things,” Leipold said. “We’ll see where it gets him.”

4 freshmen DBs! Wow, that explains a lot. Sorta doubling down on being patient.

All the more reason to run an offense that uses clock. What lessons do we learn from humiliation?

Layne - “Humiliation” would indicate there are lots of lessons to learn, though I couldn’t begin to list them.

Fortunately, Coach Leipold’s record indicates he and his staff do know how and have a program to teach young men to win. Is there really a benefit to developing a new system to not lose badly vs the established system of learning to win?

The calendar and many people have also pointed out they’ve hardly had the slightest chance to teach the players. Most people began the season realizing it was going to take time. It’s more than 4 games and unfortunately probably more than a season.

There have also been articles written about our schedule being top 10 toughest in the country. It’s gonna get worse. While it might feel better, no one really benefits from publicly complaining; other fans, coaches, current players, or recruits.

Players and Recruits, as well as their family and friends, do read and fan support is a factor. It includes attendance at games but I would suggest it’s more than that and includes what is written in the local newspaper. LJW/KUSports does a fabulous job of providing content through the year that is both honest and hopeful. Kumbayas are optional, but if it helps, go for it.