Two of the Kansas football team’s veteran leaders proved to be among the most impactful players in the Big 12 this season. When Pro Football Focus announced its all-conference teams this week, KU super-senior defensive end Kyron Johnson and junior safety Kenny Logan Jr. both landed on the second team. 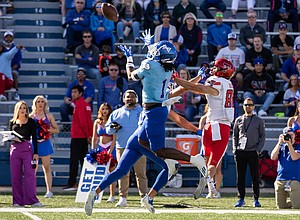 Logan, a junior defensive back from St. Augustine, Fla., finished the regular season as the Big 12’s leading tackler, totaling 113 on the year and averaging 9.4 per game. Logan also recorded six pass breakups, four tackles for loss, two forced fumbles, one fumble recovery and one interception.

Additionally, KU super-senior Kwamie Lassiter II picked up honorable mention from PFF, both as a receiver and punt returner.

I didn’t know that PFF did this. Pretty cool stuff for these deserving young men. Frankly, a more valuable award than a media or coaches poll.

True Brett. And if he continues I think Mr. Logan could play at next level.

One more big year for Mr Logan, even if it’s not a great sign for the team when a safety is the leading tackler.

65 seems like a great # for a DE. Great to see Kyron go out strong. Just reward for all he’s given to the program.

Very well justified. Those two players had a tremendous impact on the football team - especially the defensive side of the ball (Logan also was big on special teams). Congratulations to both. They were always around the ball and make a huge impact on the progress made from the spring game to the West Virginia finale. Rock Chalk.