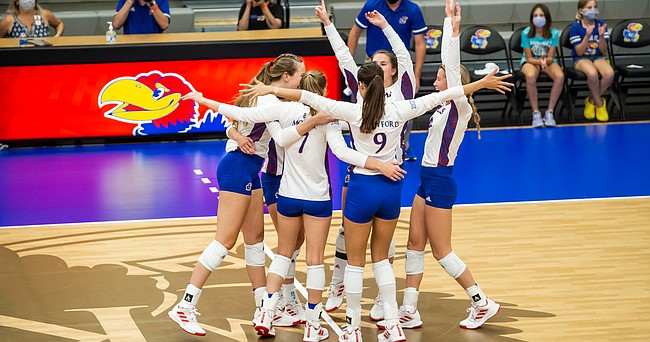 The Jayhawks celebrate a point during a recent home volleyball match at Horejsi Family Volleyball Arena.

The Kansas volleyball program strengthened its case for an NCAA Tournament bid on Saturday night by coming back from two sets down to top Kansas State in Manhattan.

The win moved the Jayhawks to 16-11 overall and 8-8 in Big 12 play. KU capped the regular season on a four-game winning streak and should be in position to hear its name called when the NCAA Tournament selection show airs on ESPNU at 7:30 p.m. on Sunday night.

The Jayhawks entered the week ranked No. 39 in the latest RPI rankings. But two wins over Kansas State, which was ranked No. 35 in the RPI rankings when the week began should help KU move up.

What’s more, Ray Bechard’s Jayhawks finished .500 in the No. 1-ranked conference in college volleyball, which puts another feather in their cap.

The Jayhawks have not earned a spot in the NCAA Tournament since 2017, and Bechard said this week that getting in would be “huge.”

“You don’t get content with going every year,” he said. “But we went a few years in a row there and it just kind of fed off of it. But, man, once you’re out a couple years it’s hard to get back in.”

Equally as challenging is sweeping a Big 12 foe, given the new format of playing opponents on back-to-back nights. But the Jayhawks did that three times this season, including twice in the past two weeks.

Freshman setter Camryn Turner delivered a stellar double-double for the second night in a row, recording 59 assists and 20 digs.

The Jayhawks now await their fate in Sunday’s selection show, and, if they get in, could open postseason play as soon as Thursday. The Jayhawks almost certainly would have to travel to another host site to begin their postseason run.

Really proud of the way this group came out tonight and competed. We were close the first 2 sets but not as locked in as we needed to be. KSU I think started playing "not to lose" in set #3 and that is a dangerous mindset.

We had a mid-season slump (WVU, omigosh we were terrible) but maybe that's attributable to freshman hitting the wall?

Anyway, great to win 2 matches in Manhattan to close out the conference season. Can't wait to see how we do in the NCAA's.

And "thank you" London Davis, you were huge!!!

Nice going, Jayhawks! Finished in a three-way tie for 3rd in the Big 12. Can't hardly see how we'd not get a tournament berth.

Nothing better than sweeping the Wildcats. Congratulations. Survive and advance if chosen to participate in the tournament. Rock Chalk.