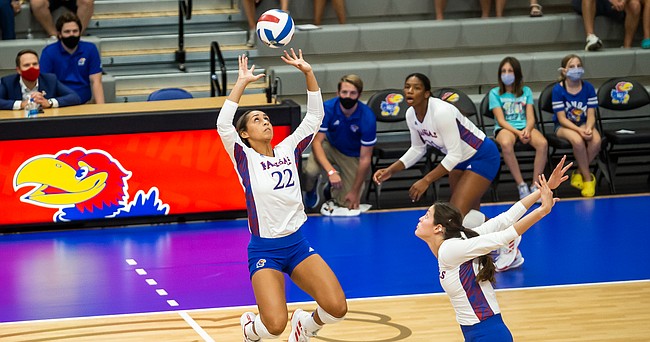 Senior middle blocker Rachel Langs and freshman setter Camryn Turner both won Big 12 Conference player of the week honors this week, after strong showings in a sweep of TCU over the weekend.

Langs was named the Big 12 Defensive Player of the Week after posting a career-best 10 blocks in a five-set win over the Horned Frogs and following that up with eight blocks and seven kills in KU's four-set win the next day.

Topeka product Turner was named the Big 12 Rookie of the Week after delivering a double-double in both matches, recording 32 assists and 11 digs on Friday night and adding 38 assists and 20 digs on Saturday. She also set career-highs with six kills and four blocks on Saturday.

The recognition marked the third weekly conference honor of Langs' career and the first for Turner, who became the second member of her team to win weekly rookie honors this season. Caroline Bien was named the Big 12's top rookie on two separate occasions early in the season.

The Jayhawks will close out the 2021 regular season Friday and Saturday against Kansas State in Manhattan, where postseason implications will be in play for the in-state rivals. Both matches will begin at 6:30 p.m. and be shown on Big 12 Now via ESPN+.