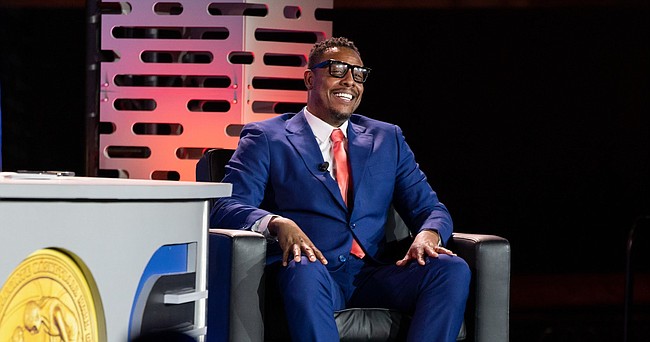 Former Kansas basketball legend Paul Pierce smiles during an interview at the National Collegiate Basketball Hall of Fame in Kansas City, Mo., where he was enshrined as a member of the 2021 class on Sunday, Nov. 21, 2021.

Pierce, who starred at KU from 1995-98, averaged double digits in scoring during each of his three seasons as a Jayhawk.

Pierce’s crew was the 16th induction class in the college hall of fame’s history.

During a pre-induction ceremony that featured sit-down interviews with several of the inductees, Pierce recalled his recruitment to Kansas and explained how seeing a game in Allen Fieldhouse for the first time changed his life.

“I’ve never seen anything like this, and I was like, ‘This is the place I need to play,’” Pierce said during the weekend celebration. “I took one visit to Kansas and the crowd was phenomenal. They started chanting my name. I didn’t even know they knew I was there, and I was like, chills. That’s when I knew I was going to be a Jayhawk.”

Pierce also had high praise for Williams’ role in his college success, which helped pave the way for a 19-year NBA career that featured multiple All-Star Game appearances and a 2008 NBA title.

The 10th overall pick of the Boston Celtics in the 1998 NBA draft, who later earned the nickname “The Truth,” said he always loved playing basketball but felt he truly learned the game when he linked up with Williams.

“It wasn’t until I got to Kansas and played under Roy Williams that I got coached,” he said. “I learned discipline. I learned very hard work. And these are things that helped me in life and when I played on the next level.”

The Inglewood, Calif., native who was recruited to KU by Williams led Kansas to 98 victories in that time, including three conference titles and two conference tournament titles.

Pierce finished his KU career with 1,768 points, with 777 of those coming during his junior season when he was named a consensus first-team All-American after leading the Jayhawks to a 35-4 season. Pierce also was a finalist for the Wooden Award during the 1997-98 season and the Most Outstanding Player at both the 1997 and 1998 Big 12 tournaments.

“He was one of those guys that was difficult to defend,” said Jamison, who played against Pierce at various basketball stops as far back as high school. “His size, agility. He could score from the inside, score from the outside. He was the complete package. The nickname sticks. He’s the truth when he’s out there on the basketball court.”

Pierce’s No. 34 jersey was retired into the Allen Fieldhouse rafters in 2003, and he has maintained a fondness for his alma mater throughout his post-collegiate years.

“It was the best choice I made,” Pierce said of coming to Kansas. “It was just the fans, the people, the relationships that you build in college — growing up from a boy into a man. That’s my fondest memories.”

Jump to the 1 hour and 20 minute mark for the beginning of Pierce's interview:

Congratulations Paul!! Well deserved honor for sure. I got to see you at AFH & will never forget one particular play you made. Can't remember who the victim was, but you were out at the 3-point line going up to shoot, defender came at you to block. In a flash you sidestepped him & went to the rim for a flush. You made it look so easy, like just another day at the office! So glad you got those chills when you came to Allen Field House & knew that was where you needed to play. We've had the chills, too. Rock Chalk, Jayhawk!

Sports Illustrated wrote a feature article on Paul Pierce earlier this year, after he was enshrined in Springfield. I highly recommend the summary of Paul's career.

I never realized that when Paul was brutally attacked and stabbed in Boston, that he was very close to suffering life threatening injuries. That really shook me up.

Congratulations to Paul! Arguably, one of the top 5 players in KU history. Rock Chalk!