Fort Worth, Texas — The Jayhawks had to try and rally back on the road at TCU Saturday without Devin Neal in the second half.

The Kansas football team’s starting running back, Neal appeared to injure a shoulder late in the second quarter. Though he was on the sidelines for the final two quarters, all he could do was watch what turned out to be a 31-28 TCU win.

Head coach Lance Leipold said after the game he didn’t yet have an update on Neal. Leipold said he was told by the training staff at halftime that the team’s leading rusher needed to be shut down.

“I don’t want to get into a guessing game,” Leipold said of Neal’s status moving forward. “As we know he’s got a very bright future, and we want to be very smart on this with him, as well.”

Neal ran for 59 yards and a touchdown before getting hurt.

Redshirt freshman Amauri Pesek-Hickson, who replaced Neal as the primary back, had 28 yards on nine carries. 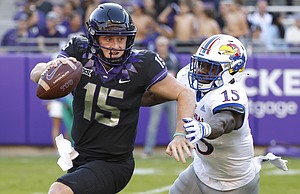 Clark out on O-line

Clark made the trip with the Jayhawks, but didn’t suit up. He wore a protective boot on his left foot.

The 6-foot-4, 323-pound veteran from New Orleans had started 19 games in a row before missing the Jayhawks’ road finale. Clark has started 40 games for KU over the course of the past four seasons.

Leipold said he doesn’t know whether Clark will be able to play in the team’s finale versus West Virginia next week.

The Jayhawks’ offense also missed starting tight end Mason Fairchild, who got hurt a week earlier at Texas — a game in which he caught two passes for 31 yards and scored a touchdown.

A starter in every game this season, Fairchild had a streak of 10 consecutive starts snapped. Redshirt freshman Trevor Kardell started in Fairchild’s place.

Leipold said he didn’t know the status for Fairchild next week, either.

Though he’s no longer KU’s starting quarterback, Jason Bean made some brief appearances for the offense at TCU.

Bean played in the backfield at the same time as new starting QB Jalon Daniels on a few occasions.

As a running back, Bean had one carry for 1 yard and one catch for minus-1 yard.

In Casey’s interview with FOX’s Tom Rinaldi, the redshirt freshman walk-on watched the viral video his mother recorded at the UT game and teared up.

Casey made his first career catch — the two-point conversion a week earlier didn’t go on his statistical record — and then some at TCU, finishing with four receptions for 34 yards and a TD.

Tom Rinaldi catches up with @KU_Football TE @JaredCasey7 on his viral video filmed by his family. pic.twitter.com/bKBxc1kTn7

When the small-town kid made the game-winning catch to beat Texas, he cemented his legacy. pic.twitter.com/pvUeqHiR7v

None by College GameDay

On the eve of the TCU game, the Jayhawks got a special visitor during their Friday night team meeting at their hotel, when former KU star Aqib Talib addressed them.

The retired five-time pro bowler and Super Bowl champion with Denver, Talib spoke to all the players, and later posed for a picture with KU’s defensive backs.

Said KU safety Kenny Logan Jr.: “That was my first time meeting him. It was definitely exciting to meet a Kansas legend. He gave us encouraging words, told us to go to and play with our swag and just go out and have fun.”

In Talib’s final season at KU, in 2007, the Jayahwks went 12-1 and won the Orange Bowl. Talib was named the MVP of the bowl game.

Talib picked off 13 passes in three seasons with the Jayhawks and ranks second all-time in interceptions for the program, behind Ray Evans (17 in the 1940s).

Count interim TCU head coach Jerry Kill among Leipold’s biggest supporters. Earlier this week, Kill said KU made a “great hire” when it handed the program over to Leipold, and Kill called the Jayhawks’ head coach an “off-the-charts smart guy.”

“You watch, he’ll get it back to where (former KU head coach Mark) Mangino had it and competing and doing all those things. It won’t take him long,” Kill predicted. 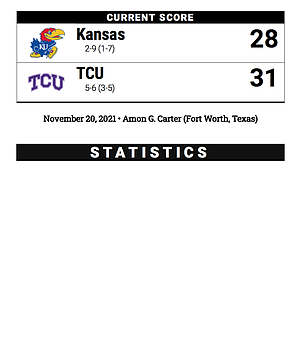 The Jayhawks’ Nov. 13 overtime win at Texas made an impression on Kill, as it did many in the college football world.

“You score that many points against Texas, you beat Texas at their place,” the Frogs’ coach said, “you’re doing something right. He’s brought a new mentality to that program and to that team.”

While Kill, a former head coach at Minnesota and Northern Illinois, said it usually takes three to four years to rebuild a program, he thinks Leipold has the Jayhawks “on a faster track” than he even imagined.

“I can tell you from taking over programs and what they’re doing, they’re doing exactly what they need to do. I think you’ll see a team that’s going to be on the rise for the next several years,” Kill forecasted.

Born in Cheney, Kill is a Kansas native and graduated from Southwestern College, in Winfield. Formerly the special assistant to Gary Patterson, Kill was selected to lead TCU the rest of the season when the program parted ways with Patterson, its longtime head coach.

Reports have indicated that SMU head coach Sonny Dykes is a frontrunner to become the next coach at TCU.

The Big 12 announced this week the football players who made it onto this year’s Academic All-Big 12 team, and 25 Jayhawks were on the first team.

The group was led by junior cornerback Kwinton Lassiter, who was one of just 11 players in the conference nominated with a 4.0 GPA.

Hopefully Neal comes back soon. It would be great if we can incorporate Jason into the offense more. He’s got way too much talent to sit even if not enough to get in front of Jason’s 70% completions.

Four catches for Casey and some nice blocking too. How long before they release the video of him getting his scholarship? Though it will be a little anticlimactic, it will be very well deserved. Hopefully, Applebee’s NIL and all will also be beneficial in recruiting.

Neal should not play hurt. Pesek-Hickson is quite adequate, and actually as good or better in short yardarge situation. He also has great potential. Add in Hinsam? who is out for season, and Locklin, if he is able to come back from serious injury, and we have the running backs.

Our lines especially defensive line are very short of depth. Our defensive line is amazing given how undersized they are. That has got to be an emphasis of recruiting. Even 1 or 2 jucos who are ready to play. Tackling in general is woeful. our offensive line has improved to the point where they are borderline adequate, and given where they started, that is amazing.

If Bean is willing to take part as wide receiver then we should use him there. Daniels has shown more total ability. And like Carter Stanley seems to have leadership qualities.