Unbeaten Jayhawks ready to welcome Jalen Wilson back to lineup 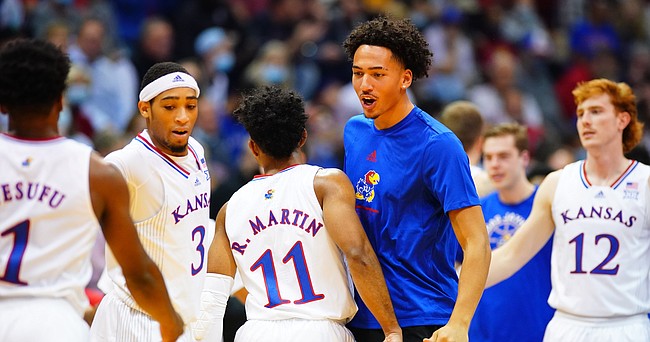 Kansas forward Jalen Wilson celebrates with Kansas guard Remy Martin (11) during the first half on Wednesday, Nov. 3, 2021 at Allen Fieldhouse.

Three games into a regular season in which third-ranked Kansas has outscored its opponents by an average margin of 88-65, the Jayhawks are poised to bring back one of their top players from a season ago.

Sophomore wing Jalen Wilson, who was suspended for KU’s exhibition game and the first three regular season games following a DUI arrest in October, is expected to return to the KU lineup next week, when the Jayhawks play North Texas in the ESPN Events Invitational in Orlando, Fla.

While discussing Wilson’s status this week, Self was asked how the third-year sophomore had handled himself during his suspension following a DUI arrest in October. Self left nothing to the imagination with his answer.

Self said it was not uncommon, during the past couple of weeks, to see Wilson running sprints and working out in Allen Fieldhouse or KU’s practice gym on his own. 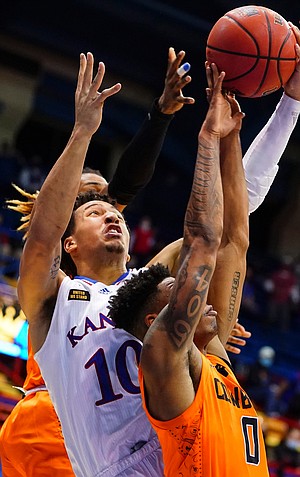 Kansas forward Jalen Wilson (10) fights for a ball with Oklahoma State guard Avery Anderson III (0) during the first half on Monday, Feb. 8, 2021 at Allen Fieldhouse.

Self also said that Wilson had been a terrific teammate and put his words about making up for his mistake into action throughout his suspension.

Thursday night, during the Jayhawks’ 88-59 win over Stony Brook at Allen Fieldhouse, Wilson often was the first one up off the bench during timeouts, rushing out to greet his teammates coming off the floor.

Where Wilson will fit into the rotation upon his return — Thursday’s game against Stony Brook is the last in his four-game suspension — is anyone’s guess at this point. But Self was pretty direct when answering that question. And he painted the picture of Wilson taking on a role that is very similar to the one he had during his breakout season in 2020-21.

“I anticipate Jalen being a 30-minutes-a-game guy, regardless of what the role is,” Self said.

Might Wilson, who averaged 28.3 minutes and started 26 of the 29 games he played in a season ago, return to his starting role?

“He could,” Self said. “(But) he kind of put himself in this position, so it’s not a guarantee. If the team’s rolling, maybe Jalen’s better coming off the bench.”

Throughout the preseason and early portion of the 2021-22 season, Self has praised Wilson for the improvements he made in his game during the offseason.

At KU’s media day, shortly after the suspension was announced, Self listed the areas in which Wilson ranked as the best player — or one of the best — on the current team.

“He’s probably our best defensive rebounder, as evidenced by last year,” Self began. “He’s our best in transition, as evidenced by watching him play every day for the last 2-3 months. He's a shot maker. He has an air about him that's very confident. And he’s a terrific leader.”

Self said Wilson’s return for the upcoming North Texas game — 1 p.m. Thursday in Orlando — would add a lot to the team in one specific area.

“You guys will be surprised how much faster we play with Jalen in the game because his ability to push it is by far the best we have in transition, from a speed standpoint,” Self said Wednesday. “It kind of puts pressure on everybody else to play faster.”

Self said Wilson had that ability in him last year, as well, but not quite to the extent he does this year. Beyond that, the coaches weren’t quite as aware of it a year ago either.

“He worked at it really hard during the offseason,” Self said. “He’s really good at bringing it. Right up there with some of the best that we’ve ever had.”

Self doubled down on that take following Thursday’s win over Stony Brook, when talking about Wilson’s return.

“Jalen is the best we have in transition, hands down, pushing the ball and everything,” Self said. “Better than Juan (Dajuan Harris), Remy (Martin), Joe (Yesufu), Bobby (Pettiford), whoever.”

When examining the lineup options that brining Wilson back into the mix would provide him, Self began laughing to himself when thinking about one option.

“The other thing that we haven’t done yet is I think that we can play Jalen at the 5 and get really quick,” he said.

With seven days between games, the Jayhawks will now begin preparations for next week’s ESPN Events Invitational in Orlando. KU opens against North Texas on Thanksgiving day.

Can't wait to watch JWill on the court!!! Hope to see him at least dunk one or two in his first few games; going south-north layup instead of going away from the basket, and of course a more steady 3pt shooting!!! ROCK CHALK!!!!

JWill at the 5 would be like a stretch version of TSU?

So many options. It will be fun to see all the pieces start fitting in.

With quick & sharp shooting guards combos, less focus on the bigs now on offense. They can seal to dunk, seal for lobs to others, seal for guards to penetrate, easy pass to 3pt shooters.... we'll see how bigs can do so many different things now than just being high-low posters. They can play so many roles in the team. Spread their legs, wrap their arms around opponents, and we'll be having good fun time!!! Efficiency rating will shoot up the roof this season.