Another scoring outburst from Ochai Agbaji propels No. 3 KU past Stony Brook 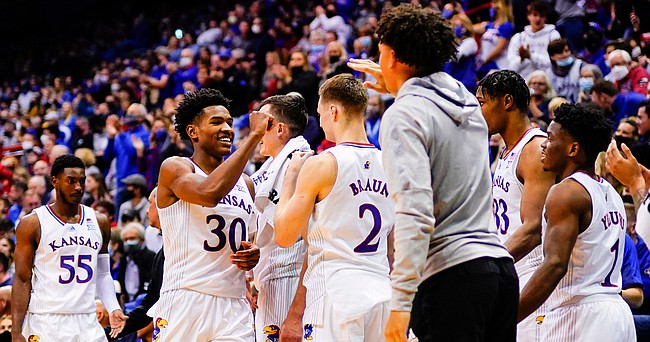 Kansas guard Ochai Agbaji (30) gets a round of fist bumps after checking out of the game with 25 points on Thursday, Nov. 18, 2021 at Allen Fieldhouse.

After arriving on 999 points for his career during Thursday’s 88-59 rout of Stony Brook at Allen Fieldhouse, Kansas guard Ochai Agbaji was given one more chance by Bill Self to get to 1,000.

“When they told me that, I put him back in and I told him to shoot it and he didn’t shoot it,” Self said after the victory. “I told him, ‘You’re only going to get one more chance.’ I was hoping he could get it at home — not that it’s a huge deal — but he’ll have to wait until Orlando to do that.”

That, too, was Agbaji’s mindset following his third consecutive 20-point game to open the season.

“I unfortunately didn’t get it, but 1,000 in Florida,” Agbaji said after pouring in 25 points for the third-ranked Jayhawks, who improved to 3-0. 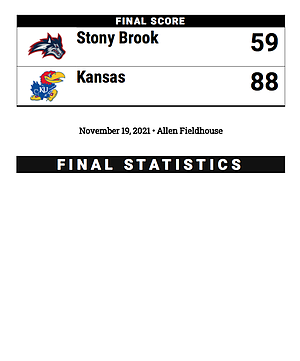 Even with a ho-hum first half in which he shot 40% from the floor and 29% from 3-point range, Agbaji found a way to show that he once again was the best player in the game.

All the proof that was needed to back that claim came during the first four minutes of Thursday’s second half.

With KU leading just 40-34 against a hot-shooting, hard-charging Stony Brook squad, Agbaji went bonkers, scoring 10 consecutive KU points to push the Jayhawks to a double-digit lead. The only thing that ended his run was his decision to drop off a pass to big man David McCormack for a bucket during the run that blew the game open.

Six points came from behind the 3-point line. Two more came on a dunk. And the other two came on a hard drive to the rim.

“He looks like a pro out there to me,” Self said. “He looks really good.”

Agbaji’s 79 points through three games rank second in all of Division I basketball, behind Illinois State junior Antonio Reeves, who has scored 80 points in three games. 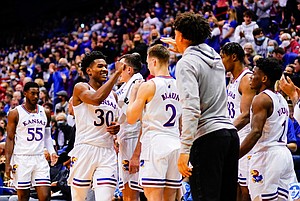 View a gallery of images from Thursday night's game between the Jayhawks and Seawolves at Allen Fieldhouse.

Agbaji’s three consecutive 20-point outings to open the season make him the first Kansas player in the Bill Self era to achieve that feat, and, whether it’s from his silky smooth stroke from the outside or his newfound ability to drive and finish, his teammates continue to marvel at the numbers he is putting up.

Perhaps the most impressive part about Agbaji’s night was the efficiency with which he played. Always moving, always passing, always looking to make the right play, Agbaji is effortlessly taking what’s there and doing it at a high level. Although he said it was still premature to put Agbaji in the same conversation with Devonte’ Graham and Frank Mason III, who both averaged at or around 20 points per game during their senior seasons, Self noted that Agbaji’s ability to rack up big numbers without trying to force the action was a great sign that his current pace may be sustainable.

“I don’t think he’s hunting shots,” Self said. “I hope he can average 19 a game like Devonte’ or 20 a game like Frank. I think we’re a long ways away from that level, over the course of the season. But he’s an efficient player. He gets 25 and didn’t shoot it well.”

Agbaji’s big highlight in this one came midway through the second half, after he caught the ball on the break just above the 3-point line and drove hard to the rim.

After faking a pass to the wing, the KU senior Euro-stepped back to the bucket, took the contact and still managed to flip the ball into the basket as the foul was called.

After standing in the lane smiling while watching the KU bench and the Allen Fieldhouse bleachers erupt after the finish, Agbaji said thoughts of, ‘You guys saw the same thing I saw’ and ‘How did that go in?’ filled his mind.

A largely scattered start by both teams saw the Jayhawks make just one of their first seven shot attempts on Thursday night. Agbaji and David McCormack combined to misfire on their first five tries, with McCormack even missing a dunk.

Stony Brook (0-2) wasn’t much better — hitting just two of its first eight shots — but both makes were 3-pointers after a defensive breakdown by Kansas and that staked the Seawolves to an early 6-2 lead.

Self said he was disappointed with how many easy 3-point shots the Stony Brook guards “walked into” in the first half. But he and point guard Dajuan Harris Jr., said the Jayhawks (3-0) did a much better job of defending in the second half.

“Coach just wanted us to heat them up,” Harris said.

Self’s other main frustration in Thursday’s game came at the end of the first half, when the Jayhawks led by eight, tried to play two-shots-for-one in the final minute but turned it over and went into the locker room leading by just six, 38-32.

“Those are the types of things that’ll cost you games,” Self said. “And we’ve got to tighten that up.”

Thanks to Agbaji’s outburst, along with 10 3-pointers from the Jayhawks as a whole, Kansas outscored Stony Brook 50-27 in the second half to cruise to victory.

Starting guard Remy Martin played just 18 minutes on Thursday and did not score. Self said Martin wrenched his back during Thursday’s game, aggravating a minor injury he suffered earlier in the week in practice.

With a full week off before their Thanksgiving Day match up with North Texas at the ESPN Events Invitational in Orlando next Thursday, Self said he was not worried about Martin’s injury.

In addition to Martin expected to return to full strength next week, the Jayhawks also are planning to welcome suspended sophomore Jalen Wilson back to the lineup for the opening game in Orlando.

It's becoming increasingly clear that Ochai is the leader of this year's Jayhawks. When the team is lethargic and struggling, he provides the spark that awakens them from their slumber. When we need big plays, he delivers. We will go as far this season as Ochai can take us. He can get us to the nirvana of a national championship, and I hope that he does.

We might be averaging 18-20 assists per game with single digit TOs by end of the season if we keep playing like this. Good things happen when players share the ball. This KU team looks so comfortable finding each other - their plays just fire on all cylinder. So far, those freshers, especially Bobby Bulldog Pettiford, are not disappointing, they're so fun to watch. So are the transfers. Love watching this team! Look forward to B12 games, I think we'll destroy them this year.

The rest of the team, sans Remy, was really solid, and that still without Wilson. It will be great to get him back to see how much he’s developed since last year. Eventually, Remy will fit in also.

Remy played with twisted back, according to coach BS. That could've been a 40-pt game..

Thanks Steve. Hadn’t seen Coach’s comment before mine. Makes sense. All the better to have our depth, and nice to have Wilson coming back.

What is a "Euro-step?" I've heard the word two times today. Never before. Please explain this new basketball concept. Thanks.

rather than try to describe it here, are you able to go on youtube and search for "best euro step moves"?

basically it's a way of taking advantage of the "two-steps" rule without being called for a travel. The two steps are in different directions so that the player can move past the defender while driving to the basket.

I don't know for sure that it originated in the euro leagues, but it was very popularized among international players in the past 10 to 15 years. Particularly players such as Manu Ginobili (not european).

That one was 3 steps so it wasn't a "perfect" euro step.

Jalen Wilson uses the euro step a lot on his drives. He'll pick up the ball and take a big step left and then a step back right before laying it in. We should be seeing that soon.

It was actually 4 clear steps, a prefect travel. It was a "perfect" euro step cause it resulted in a KU win.

Euro-step is basically a goofy NBA permissive move that was formerly called “traveling.”

Two steps and a layup has never been "traveling" in modern basketball. Doesn't matter if both steps are in the same direction or not.

In the NBA you're actually allow 3-5 steps in the euro-step. Depending on the popularity of the player and how much the ref bet on the game

That term has been around for at least 30 years. The move was common in the European leagues long before it was allowed in the US. It consists of two long steps toward the basket. Usually one or the other is used to sidestep an opposing player. I don't know when it came to the NBA, but I do remember Manu Ginóbili using it a lot. I remember Sviatoslav Mykhailiuk using the Euro step to win a game (I believe) against Kansas State.

*As I've been saying since the first exhibition game, I think Clemence is a really great addition to our roster. Yeah he is young and needs to get stronger, but we've never had a big in recent memory who is a legit outsider threat. If he can play D at the perimeter, it could really cause problems for others teams. Maybe HCBS can do a two big rotation/high-low again.

*Remy Martin has really not shown up yet, at least not the way he was hyped. I'm curious to see how the roster shakes out. There are a TON of guys on this team that can play. It's honestly really exciting every substitution to see who is coming into the mix.

*Prison Mitch played some tough, physical minutes last night. It was fun to watch him tussle down low with Stony's big men. He may have an innocent race, but he's not one to get roughed up by the opposing team.

*Finally, what was up with the RJCH chant last night? It didn't start until there was like 45 seconds left in the game. Also, whoever started it made it a really high pitched version of the chant. I also heard a few "whoooos!". Please, for the love of all things sacred in college basketball, never, ever add a "whooo" after the chant. It totally undermines the haunting, final nature of the chant.

Typo: It should read "face" not "race" in bullet point three.

*Prison Mitch played some tough, physical minutes last night. It was fun to watch him tussle down low with Stony's big men. He may have an innocent race, but he's not one to get roughed up by the opposing team... - THIS!!!

IMHO, Mitch played with heart of a winner, while Dave... well, he'd better get back and continue where he left off last season, or will be replaced as a starter. He didn't seem ready to make the best out of our guards' interior passing. Mitch, on the other hand, rolls & rocks perfectly!! We have so many plays to make use of those bigs now that we got capable & 'willing to pass' guards. So many ways to score, as you all have seen in 3 games. If the bigs were denied, guards can penetrate or takes a J. Averaging 80s a game is not impossible. This is '11-'12 remake!!