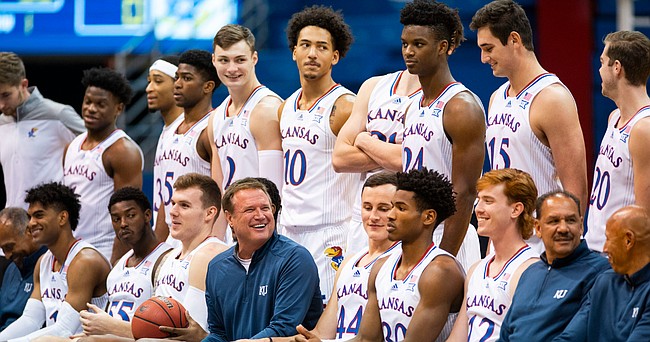 Kansas Jayhawks head coach Bill Self has a laugh with his players as they get situated for their official team photo during Media Day on Tuesday, Nov. 2, 2021 at Allen Fieldhouse.

Kansas senior David McCormack has played in 92 games during the first three years of his KU career, but there’s something about Wednesday’s exhibition game against Emporia State that has him buzzing.

“It feels like I get to experience Christmas all over again,” an energized McCormack said during Tuesday’s Kansas basketball media day at Allen Fieldhouse. “It’s a brand-new start in the sense that we had a completely different world last year, and now we’ve hit a semi-refresh button. It kind of feels like freshman year again.”

After playing inside a far-less-than-half-full Allen Fieldhouse throughout the 2020-21 season because of the pandemic, McCormack and his teammates will get reacquainted with the program’s rocking home venue at 7 p.m. tonight against the Hornets. The game will be televised on Big 12 Now via ESPN+.

A KU spokesperson said Kansas basketball will follow campus guidelines regarding current COVID-19 protocols, meaning Allen Fieldhouse will be open to its full capacity of 16,300 spectators and masks will be required.

For veteran players like McCormack, getting back to a full fieldhouse means a return to the good old days, when the Jayhawks leaned on the home crowd to give them energy and make life hard on the opponent.

For the 10 newcomers on the roster, the matchup with ESU will go down as one of those games they’ll never forget — and it likely won’t have anything to do with statistics or the final score.

“I’m excited to see people in the building again, just the fans and to feel their passion,” said KU junior Christian Braun. “But I’m also excited for the young guys to feel that, too.”

There will, of course, be important elements of the actual game. And the Jayhawks are hoping to put on a good show and prove to themselves and their coaches that they’re ready for next week’s regular season opener against Michigan State in New York.

“I want to see us play well together,” Self said. “We need to get confidence. And I’m not saying confidence just by making shots.”

The confidence Self referred to was much more operational than anything else.

While proper execution, the final score and the lessons they learn about themselves in the tune-up will all be important, the overwhelming emotion surrounding this team on the eve of returning to a full-throat Allen Fieldhouse was one of appreciation for the opportunity to play in an environment regarded by many as one of the absolute best in all of college basketball.

“I’m excited,” Self said. “Christian and Jalen and Juan (Dajuan Harris) are the youngest guys on our team that actually have experienced anything like what Kansas basketball is really about. Nobody else has. Even on a visit. So this is going to be new for most of our team, and that’s exciting to me. They’ll understand why you grind and why you put in the work you do and appreciate it more after playing at this place when fans can attend.”

What about the nerves and adrenaline rush that comes with that? Most of the newcomers are fully expecting that to be a part of what they’ll have to compete with in this one.

“Of course there’ll be jitters, with the fans and just being here,” Drake transfer Joseph Yesufu said Tuesday. “It’s high expectations here, but I’m definitely ready for it.”

Added freshman KJ Adams: "My juices have been running all week. I'm just excited to get out (there). Late Night was a little taste and I loved that too, so I can't imagine what it's going to be even though it's just an exhibition game."

The 11 wins in league play were a seven-game improvement from the season before, and it marked the first time ESU has finished .500 or better in MIAA play since the 2013-14 season.

Second-team all-MIAA selection Jumah’Ri Turner returns to lead the Hornets this season. A senior from Minneapolis, the 6-foot-2, 184-pound Turner averaged 19.1 points and 3.5 rebounds per game for ESU last season.

The explosive guard scored in double figures in all but one of ESU’s game last season. That run included 13 games of 20 or more points.

The Hornets are coached by Craig Doty, who is in his fourth season in charge of the ESU program. Doty enters Year 4 with a record of 35-46. His first game on the sidelines for the Hornets came against Kansas during an exhibition matchup to kickoff the 2018-19 season.

Wednesday’s clash will mark the 25th meeting between KU and ESU, with the Jayhawks leading the all-time series 21-3. That includes a 9-0 record in exhibition games. KU has won the last 12 meetings with the Hornets, dating back to 1992. All of those games were played at Allen Fieldhouse. The overall series dates back to 1904.

“returning to a full-throat Allen Fieldhouse”

Full capacity doesn’t equal full throat when masked, though the view of other sporting events seems to indicate the mask is mostly required for entry.

It is good to see the season starting and at least some things being restored.

I still want KU to come to Warrensburg and play UCM. Phog coached both programs. UCM has a good little dedication display to him at the football field too.

It'll be good to get back to having the usual 16,300 fans at Allen Fieldhouse. Only allowing 2,500 fans to attend last year's games to comply with the decrees of Dr. Fauci and his insidious collaborators was a heap of BS. It's long past time to get back to normal and stop allowing fear to control us and fearmongers to rule over us. Whatever happened to the mentality of President Roosevelt, "The only thing we have to fear is fear itself"?

It's long past time indeed! For people to stop bringing their non sports related opinions to a sports message board. I suggest instead you just post a comment stating, "Need attention. Please reply to this comment." I'll be happy to spare a moment of my time and share some words of affirmation with you.

The second half of that sentence reads "--nameless, unreasoning, unjustified terror which paralyzes needed efforts to convert retreat into advance". 1932.

Its context is about coming out of the Great Depression. He goes on talking about how Leadership and the people working together is the only way to overcome the tough issues they face.

I think if FDR had a chance to get the Polio Vaccination, he would have taken the shot. Was not available till 1955. It too has a 99% success rate.

When I was 5 we moved from Ashland to Emporia as my father got discharged from the Army and was attending Emporia State on the GI Bill. While there, my father worked evenings at the YMCA and became Kansas' ping pong champion. I attended kindergarten at Emporia State and still remember feeding swans at the campus pond.

While I remember Emporia State with fondness, I'll still root for the Jayhawks tonight.

Sidebar: KU vs Emporia State is on ESPN+ tonight. It is the first of ten (10) basketball games this season.

I like ESPN+. KU game telecasts include a beginning 30 minute "GameDay" before tipoff, and a game recap after the game. Video quality is normally HD good (not always). There are still many critics, but it's relatively cheap, getting better and it's here to stay.

Matt, Any chance to get the KU BB roster on the website with height, weight, class and Jersey number?